Critique: Spaghetti and Meatballs from a can versus Banquet's frozen entree! 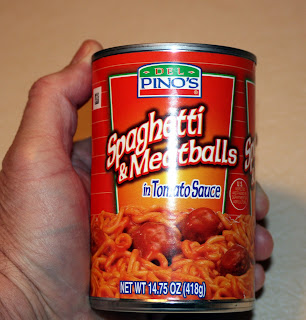 In a previous post, I pretty much slammed the heck out of Banquet's Spaghetti and Meatball entree, suggesting you might be better off getting the canned stuff instead. I mean is jumping to a canned product all that much an improvement? I decided to, in effect, eat my words and find out.

To that end, I wanted to make sure that for this comparison, I wouldn't make the mistake of choosing a can of Chef Boyardee, but rather one of the generic versions for this test. To that end, I visited my local Save A Lot and selected a can that was labeled Del Pino's Spaghetti and Meatballs in Tomato Sauce. The can contains about 15 ounces of product which consists of some pasta and meatballs all swimming in a nice red sauce. Hey, that's just like Banquet's entree except it's not frozen!

Next, a word about the cost and nutritional aspects of the frozen Banquet product versus the Del Pino's canned offering. The table above show that the canned item is considerably less expensive ounce for ounce (Cpoz column) than the frozen. Also, on a 255 gram serving basis, the nutritional amounts are about the same with the canned spaghetti having a little more salt which acts as a preservative. Having said that, let's take a look at how I ranked the canned spaghetti:

Overall, then, according to my humble opinion you are getting a better tasting product in the canned spaghetti for less money and at the expense of only a slight penalty in the area of salt. Give me some more Del Pino's!
Posted by Dan Owen at 9:56 AM