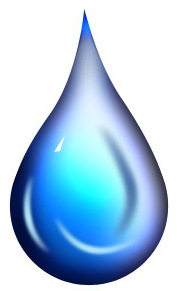 This is a drawing of a raindrop that fell from the sky over my home at precisely 5:25:03 PM CST on Monday, May the 23rd. The little guy committed suicide after what was apparently a fall of some great distance. Nor was he alone. Countless other raindrops also fell that day, splattering themselves pointlessly on the ground in and around my humble adobe. It was quite a mess as you could well imagine.

I’m pretty sure this particular raindrop was also heavier than average. I would estimate he had over ten quadrillion molecules of water in him which would be considered pretty obese in some raindrop circles. Not morbidly obese, mind you, but definitely a drop to be reckoned with.

It’s a good thing that raindrops are immortal. After his 'demise', my drop will eventually evaporate (reincarnate) into the atmosphere where he will rise back up to the heavens…only to fall from grace once again. A cycle that has been repeated endlessly over the last three billion years.

Maybe next time, he will fall over some great ocean. There, in the company of other fellow drops, he might spend a long time before parts of him are once again lifted up and the cycle repeated. Why, just imagine where ten quadrillion molecules might end up over time!

Then again, this particular raindrop might get lucky enough to fall over one of Earth's poles where he could become part of a glacier.  Existing in a solid state, he could well lay in suspended animation for tens of thousands of years. Slowly crushed down into a crystal of clear blue ice as billions of his mates cover and protect him over the centuries.

Yes, the life of a single drop of rain can be most interesting.


This posting on a raindrop was the sole creation of the Forsythkid.
Posted by Dan Owen at 9:00 AM