Random Thoughts for a late August in 2013!

Obama! Ya gotta love a man who can talk from both sides of his mouth!

Mr. President, you gotta be really talented to speak on topics like Syria and still be able straddle that fence so effectively without hurting your balls! I guess that mean old 'red line' has now become a green light for Assad to do pretty much whatever he wants, even up to and including the killing of hundreds of children in gas attacks! My question is how you can you sleep at night?


A WWII Vet gets beaten to death! And, for what?

An 88-year-old Delbert Belton, was sitting in his car when two colored teens attacked and killed him in what looks like a random robbery attempt. The teens were caught in the act by surveillance
cameras (really clear pics) and that makes one wonder if these two had any brains whatsoever. I mean even a complete retard would have thought to consider that there might be cameras in the area. And, you two Einstein's, how much money would an old man likely to be carrying anyway? Death or life in prison for what! Ten bucks! These two could easily be candidates for the 'Dumb and Dumber' trophy of the year!

Soon to be President Hillary!

Wow! After enduring eight years of Obama and his clown show, we may get a chance to cap off the Republic with the Hilary song and dance extravaganza. Right now, she is by far the best candidate being fronted by either party and that in itself is concerning. Sadly, considering the incredible stupidity of the majority of the voting public, she will probably be a good fit as an icon who will generously spend the country so far and so deep into a hole that even a Third World status may be beyond our means by 2020. Thanks everyone, thanks for nothing!

But wait! There's more! If you all act promptly, there are still a few Hillary Nutcrackers available for a modest sum.
Posted by Dan Owen at 10:17 AM No comments:

The mystery of the misshapen jelly dispensers!

It doesn't take much to upset my nice and tidy world. I've learned how to duck out, tune out and otherwise not notice that my country is falling down around my ears. But, those poor twisted jelly dispensers, make that just about cooked my noodle!

In the picture, you'll note that while the strawberry jelly packages lie perfectly flat, those grape dudes are having a tough time finding enough space. Why, you ask? It's because that entire side of the container has been somehow twisted out of true – possibly due to a spacial distortion of the three dimensional quantum continuum that Eisenstein like to talk about so much. Literally, the grape side of the plastic dispenser may have gotten pushed into a 'parallel universe' for just a fraction of a second and then savagely ripped back! The end result is pretty awful, I'd have to admit. And, while these SD's may be extremely rare, they've apparently struck with a vengeance at the restaurant I like to frequent. All, I repeat, all of the jelly dispensers were likewise afflicted and amazingly it's only on the grape side!

What does all this mean? Well, I've submitted a theory to the US government, that this may just be the tip of the spacial distortion iceberg. I'm betting that very soon all sorts of ubiquitous items will turn up all twisted and bent out of shape. Take our members of Congress for example...
Posted by Dan Owen at 10:02 AM No comments: 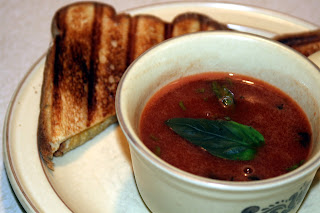 Earlier this day, I had breakfast with a friend when the topic of tomato soup came up. I thought to myself that that would be an awesome idea to have for lunch along with a grilled cheese sandwich! This combo was often made by my mother when I was young. That said, I can still remember eating this world class combo as though it was yesterday.

Nutritionally, this popular 'kids' meal, has quite a lot going for it. (That is, if you don't take the relatively high sodium content into consideration). One half cup of the tomato soup from Campbell's offers up 480 mg of the 1,176 mg total. All told, that's a pretty salty meal deal! Blame this on canned goods and breads in general as they all use way too much sodium in their recipes. That aside, it's still a tasty combo that everyone seems to accept willingly, and growing up, I'm guessing I enjoyed it at least once a week.

Preparation was a snap, especially if you have some sort of dual-sided grill. (I have an old George
Foreman grill that is about as old as I am, yet it still does a pretty nifty job on anything you put in it). Today that was two slices of potato bread along with a slice of American cheese! 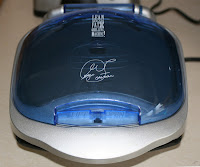 The canned soup was dumped into a small pot along with a can of water. This was then heated to boiling while being stirred from time to time. The total elapsed time for this meal deal was just over 15 minutes start to clean up.

It's time for a Reuban sandwich! 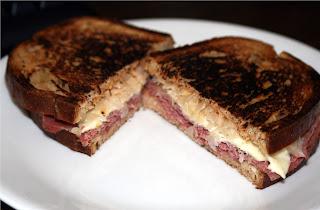 Every so often, I get a hankering for a plain Jane Reuben sandwich. Not one of those fancy Reuban's served at local eateries, but rather a simple sandwich comprised of modest amounts of corned beef, sauerkraut, Russian dressing and Swiss cheese all nestled between two slices of toasted rye bread. Simple, good tasting and easy to make concoctions that also doesn't slam the diet conscious diner.

A simple, but delicious pasta meal! 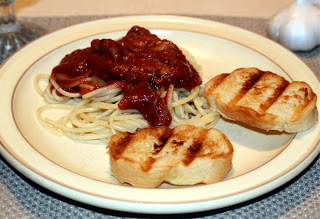 “Making a good spaghetti meal takes more effort than just dumping, boiling and hoping for the best. You need to use a little common sense and have lots of practice!”

In years past, I've made pasta that ran the gauntlet all the way from al dente (good) to mush (really bad). I quickly learned that mushy spaghetti was not the way to go and so came up with a tried and true format that I thought to share here:

When I make the sauce, I try and keep things pretty simple. I like to sauté some diced onions, a little dried basil, mushrooms and garlic in a pan with a just a little bit of olive oil until the onion has sweated and then will add a half a 4 oz can of tomato paste to the pan. I let that cook in the pan for a bit, stirring everything with a wooden spoon. I then would add a little bit of white wine (since tomatoes have a lot of alcohol soluble flavors which are enhanced in the presence of alcohol) and then some of the reserved pasta water. I then allow the sauce to simmer to the consistency that I'm looking for, at which point, I add the sauce directly into the pot with the drained pasta and stirring everything up thoroughly. This meal is then served immediately!

Note: Mastering the precise quantities and cooking time will take a bit of trial and error, but in the end you will have a great tasting sauce that is actually much cheaper than anything you can purchase at a store.

When serving this dish, it's great if you include some sliced garlic bread along with a glass of red wine. Enjoy!

A final note: One of the source books that has inspired me to be creative with food was written by Anthony Bourdain and is titled 'Kitchen Confidential'. A three-star concoction that is the collaborative effort of a team of "wacked-out moral degenerates, dope fiends, refugees, a thuggish assortment of drunks, sneak thieves, sluts, and psychopaths,".

Chef at New York's Les Halles and author of 'Bone in the Throat', Bourdain pulls no punches in this memoir of his years in the restaurant business. His fast-lane personality and glee in recounting sophomoric kitchen pranks might be unbearable were it not for two things: Bourdain is as unsparingly acerbic with himself as he is with others, and he exhibits a sincere and profound love of good food. One of the best books I've read in a long time!
Posted by Dan Owen at 8:04 AM No comments:

Tasty Nutria are coming to Mo! 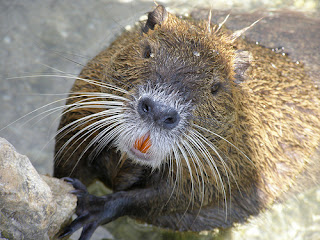 It's time to load up the old shotgun and get ready for a new food source that is set to invade parts of southern Missouri over the next few years. Blame it on global warming, but these fur bearing animals also known affectionately as Swamp Rats, are going to be moving into southwest MO soon. And, thank goodness they are edible, as these prolific critters can lay waste to your landscape in no time at all!

Give this recipe a try just as soon as you spot these tasty critters in and around waterways. Invite your friends over and surprise the heck out of them when you serve up a platter and tell them to get 'rat to it'!
Posted by Dan Owen at 1:43 PM No comments: 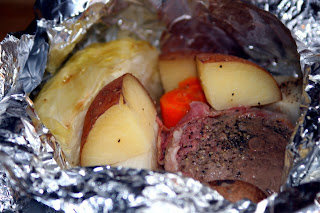 What's better on a cool and rainy day in August than a nice cooked foil meal done out on the grill? I came up with the meal deal on the spur of the moment when I was going through my fridge and noticed I had a few carrots, onions and red potatoes that had been harvested from my garden earlier in the week. I also had a hamburger patty and so decided a simple foil meal would just fit the bill for an hearty afternoon repast. 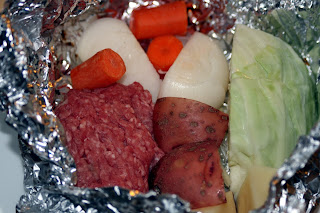 Prepared all the ingredients and center in a large piece of foil. Carefully wrap the foil around the meal making sure to seal the edges for a steam-tight fit. Place in the center of a charcoal grill where the coals have been pushed to the side for indirect heat. Cook for about an hour and fifteen minutes. Optionally, you can also use an oven set to 305 degrees for about the same amount of time. After the meal is done, carefully remove and open, making sure the steam doesn't burn your fingers. Enjoy!

The total volume of food for this meal was 413 grams. Note: with the addition of a pat of unsalted butter, the overall calories came in at ~565. I also made a video on this type of meal a few years back for anyone who might be interested.
Posted by Dan Owen at 10:38 AM No comments: