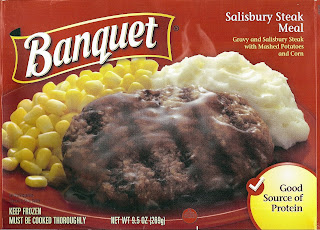 It’s been a while since I reviewed a Banquet TV dinner! (I was eating wholesome food, but ran out of money). So, I thought I'd add their Salisbury Steak meal to my growing collection of dinner critiques. Of the ones I’ve tested thus far, this one ranks up there close to the top (of the current heap). As a side note, that little red dot toward the bottom of the box will inform you that it was 'US inspected by the Department of Agriculture'. For such small print (good for testing ones eyesight) that little mark is destined to become responsible for escalating food prices as a result of the passage of the Food Modernization Act last year. Just another benefit of your ever expanding nanny government. Here's a side bet. I'll wager this seventy seven cent meal will cost over $1.25 by fall. [Update: By fall 2011 it has gone to a buck! And by the fall of 2012 it was still at a buck!]

To the best of my knowledge a 'Salisbury steak' is really nothing more than a fancy term for plain old meatloaf. In this package, you get one ‘steak’ soaked in gravy along with a modest amount of mashed potatoes and corn for about eighty-eight cents. (just a few months ago, these were .77 cents each).

The picture on the package is actually pretty accurate to some extent. Some of the meals I’ve tried do not look anything like what’s on the cover of the box. The taste also lived up to my expectations. Meatloaf, gravy and mashed potatoes are comfort foods aren’t they? The corn, well, it’s just corn and tasted as such.

As to the nutrition (or lack thereof), this meal comes in at 290 calories of which 150 of those are from fat. You also get a not so very healthy slug of cholesterol (30 mg) and about half a persons daily limit of salt (1100 mg), so please don’t make this an everyday meal deal. Having said that, the overall taste is pretty good, so I'd give this one a 7 on a scale of ten.

Note: Banquet foods are made by ConAgra Foods, a company out of Omaha Nebraska so at least you are eating something that's still made in the good old US of A.
Posted by Dan Owen at 6:34 PM