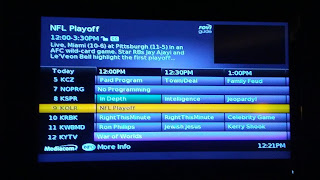 Whenever I get to wonder how Mediacom will screw with me, I never have long to wait! On January 8, 2017 they decided to block the once channel (KOLR) that was carrying the Steeler playoff game! And when I called to complain.... their number was out of service!! What a pant load of crap this company is...
Posted by Dan Owen at 12:35 PM No comments:

Email ThisBlogThis!Share to TwitterShare to FacebookShare to Pinterest
Labels: do not subscribe to Mediacom, Forsythkid, Mediacom loser, opinion

County Mart and that fine print! 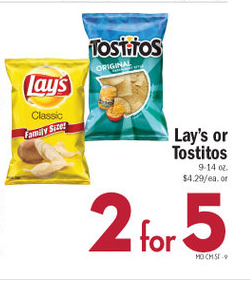 Forsyth MO. - Country Mart has been around for some time. In general, they have been my principle destination for all my grocery shopping needs. And, like a lot of folk, I try to take advantage of any sales that might be going on such as what they put online. It's also been a common practice for them to have ads that read '2 for $5' and stuff like that. So, it was with no little surprise when I fell victim to the ad pictured above. At first glance, it looks as though you could just buy one bag and expect to pay $2.50, but that wasn't so. If you look closely, you can see they have a 'disclaimer' or modifier that states that if you purchase one bag, you pay the full price. In their most recent flyer that will run from Friday, January 6th to Sunday, Jan the 8th, all of the other 'two for's' do not have that wording! It's just when one purchases these chips, that an unaware shopper might breeze through the checkout counter only to find that they paid full price, after they got home!

Now, I fully understand that this sort of thing is legal. It just seems to be shady to people like myself!
Posted by Dan Owen at 1:31 PM No comments:

California's lawmaker loons are out in force! 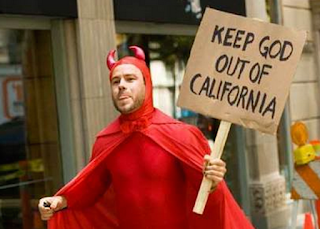 [Reprinted as I could not successfully link this blog]

I’m not in the habit of complaining at the outset of a column, but I’ve taken on a nearly impossible task — figuring out which, of the hundreds of new California laws about to go into effect, are the stupidest.

It’s really, really hard to keep the list at 10 with hundreds of hare-brained schemes that became real laws.

After all, for far too long, the California Legislature has been a “conservative-free zone”— even though there were a handful of “Republicans” occupying seats and taking up space.
I’m going to list the new laws in order of their egregiousness to me, but I’m open to additions or wholesale re-ordering if you care to comment. Given that Californians are facing 898 new laws going into effect on January 1st, 2017, there’s plenty to hate.

Prop. 63: “2nd Amendment Nullification” Act. Although various portions go into effect in various years — yes, they staggered implementation of this “critically needed reform,” some out to 2019 — this is the most sweeping assault on our long-cherished, God-given natural right as Americans to protect our lives and our freedom. It requires you to pass a background check and pay for a permit to buy ammunition for the gun you may have just passed a background check to buy. Yeah, that’ll stop criminals — who buy their guns and ammo in parking lots from other criminals. Woo Hoo! Next, it makes high-capacity magazine (any magazine that holds more than 10 rounds) illegal to possess — even if you bought it prior to the current ban and ownership was previously considered grandfathered. This law should make it clear that the goal of the left is not “safety” — it’s control.

SB880: “Bullet Button Ban.” For years, California Democrats have sought to ban a made-up classification of semi-auto rifles with “evil features” that they re-named “assault weapons” for propaganda purposes. Every year, California Democrats attempt to increase control over this “hated group” of guns — until they finally outright ban all semi-automatics. This law will not do a single thing to further public safety, as the San Bernardino terrorist attack illustrated — determined mass murderers will simply ignore and work around all gun control laws — as if they are just words on paper. One last bit of irony: in a previous legislative session, this same bill was sponsored by none other than disgraced State Senator Leland Yee. If that name sounds familiar, you’re right. Leland Yee wanted to “protect” Californians from “assault weapons” on our streets — that is, until he was arrested for trafficking fully automatic weapons and rocket-propelled grenades in exchange for campaign contributions. He’s currently serving a five-year prison sentence.

SB3: Minimum Wage Hike to $15/hour by 2020. As a result of a strong socialist push by unions and complicit governments — such as the union-controlled California legislature — businesses are looking to eliminate as many jobs as possible, investing in automation instead. When you combine this with unchecked illegal immigration — where you have an unlimited labor pool willing to work for sub-par wages under the table — the future for entry-level jobs and small business owners in California is bleak.

AB1785 The “Hands Free” Law. This is another example of government gone wild. AB1785 prescribes driver behavior so severely that in and of itself, I believe it will cause more accidents — and more deaths. Not only must the phone be dash mounted — meaning you’ll have a permanent distraction right in front of you — but you may not text, take photos or video, or enter GPS destinations while driving. Fat chance of stopping those activities with a mere $20 fine. The bill does stipulate that “the only time a driver is allowed to touch the device is when he or she is activating or deactivating a “feature or function.” However, that process should only involve a “single swipe or tap of the driver’s finger,” according to the bill,” mynewsla.com reports. How about “hands off” my phone instead of an unenforceable “hands free” law?

AB 1732: Single-User Restrooms. If you’ve ever had to go so badly that you used the opposite sex restroom at a gas station or Starbucks, then perhaps you think this law is needed. But do we really need another law regulating bathrooms? Some businesses have already put signs on their single-use restrooms designating use by either sex. And sometimes people just take it upon themselves. I can’t help but think this law is unnecessary and diminishes us as a society a little.

SB 1383: Controlling Cow Flatulence. Not making this up. In spite of the fact that 53 California dairy farmers went bankrupt, moved out of state, or just closed down this year, the Marxist-Progressives are back at it again. Capture cow farts or suffer heavy fines. CARB (CA Air Resources Board) suggests inserting a tube into the cow’s digestive system and venting into a backpack. Even liberals admit that laws like this, where government tries to control the uncontrollable, can have undesirable economic consequences. Lost jobs, lost industries, lost revenue. Stupid law.

AB 857: Ghost Gun Ban. Even if you manufacture your own gun — starting with an 80 percent receiver — that requires you to have special skills and tools to complete the machining, you must now register it and obtain a serial number from the California Department of Justice. The purpose of this law is simply to record your name and your firearm on a list for eventual confiscation. Once again, control — not public safety — is the goal.

SB1322: Legalizing Child Prostitution. This law bars law enforcement from arresting sex workers who are under the age of 18 for soliciting or engaging in prostitution, or loitering with intent to do so. So teenage girls (and boys) in California will soon be free to have sex in exchange for money without fear of arrest or prosecution. Now that is nuts. I understand the idea of trying to not punish the victim, but certainly granting judges discretion is better than legalizing and therefor “green-lighting” behavior that is so harmful to the individual child.

Prop. 57: Early Release for so-called Non-Violent Criminals. This was Governor Jerry Brown’s baby — the crown jewel of his prison reform initiatives. Among those offenses he considers “non-violent”: rape of an unconscious person; human trafficking involving sex acts with minors; and assault with a deadly weapon. Blogger Felicia Wilson summed it up well (original emphasis): “Call me crazy, but shouldn’t a crime that includes the word rape or assault be considered, I don’t know … violent?”

AB 2466: Felons Voting. Low-Level felons serving sentences outside of state prison get to keep their right to vote. Hmm. Wonder which party this could possibly help? Just like the “illegal alien vote,” Democrats will have the felon vote locked down. This is simply about protecting their power and making it permanent.

When California Democrats promised to take to the streets to defend the rights of convicted felons, illegal aliens and welfare recipients, they weren’t kidding. If only they were as serious about cracking down on immigration cheats and violent criminals as they are about penalizing law-abiding citizens and gun owners, California would have more jobs, less crime — and might be a place people want to come to instead of fleeing.

After experience 'hinge failure' on a number of French's mustard bottles, I've come to the conclusion that whoever designed that little piece that keep the cap on was likely overpaid.

After only about eight uses, the little cap that is attached with two bits of plastic seems to invariably break and fall off! And, when it does, that little piece of yellow plastic really can fly off and can be hard to relocate. I can only wonder how many users are currently experiencing the same type of 'failure' considering the millions of pounds we consume every year!

I've written French's about this problem and will share if they respond.
Posted by Dan Owen at 6:53 AM No comments: