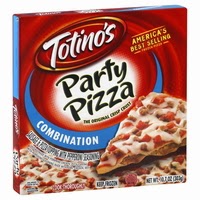 It's Halloween, 2013 and I find myself home alone with nothing but a Totino's Party Pizza to keep me company. Outside, it's dark and all sorts of little rug rats are running to and fro, all under the watchful eyes of parents who sit patiently in their cars burning gas while wondering if they will be able to afford the dental bills that will be sure to arise from their kids eating all that sugar! For my part, I'm hiding inside my home, drapes closed and lights off, hoping the little beasties will stay away. Why, you ask? Have you seen the cost of candy lately?

My little pizza, which tacitly promises to get me into a party mood cost only $1.34 (it was on sale), sits on the top rack of my oven which I obediently set to 450F. According to the directions, I needed to cook said party pizza for about 15 minutes prior to 'digging in'! 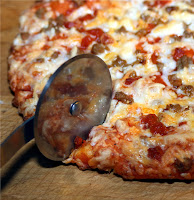 Now, back in October of 2012, I did a short critique on a similar pizza made by Celeste. That pizza could be prepared in either the oven or the microwave and so was a bit more convenient. It cost about a buck and a quarter on sale and so was a little bit cheaper – at least when on sale. Even the calories are similar 370 for the Celeste versus 360 for the Totino's version. So, as you probably have guessed, both these dudes are basically from the same branch of the pizza tree! That is to say they are small and go down really fast.

After heating my party pizza for the required 15 minutes, I sliced it into quarters, poured a glass of milk and sat down to ingest. Frankly, I found this pizza to be pretty bad! The crust was a little hard for my taste and the toppings were somewhat...tasteless. Sadly, I give this one a 4 on a scale of 10. Think I'll be sticking with Celeste in the future, or better yet, I'll just shell out more money for a real fresh baked pizza!

Update: December 2nd, 2014. And yes, I've decided to try this deal again.. (Hey, I'm a sucker for punishment)! This time around, the cost of this Totino's combo pizza was up a few cents, now at $1.39. Still very affordable, but the real question remained. Is there a better way to make the unpalatable more palatable?  So, instead of baking it for 15 minutes at 450F, I brought the time down to 13 minutes, thinking this might improve (as in make softer) the texture of the crust. When the timer dinger went ding ding, I knew it was time to PARTY!

The verdict: Yes! The crust was much softer! And while the taste was still on the bland side, it was edible, none the less! One half the pizza (which I ate) was about 350 calories.