Oaxaca is a city in central Mexico. It’s known for its colonial buildings, many of which are made from green volcanic stone. The central Zócalo square features the Palacio de Gobierno, with colorful murals depicting regional history. Alameda de León square faces the ornate facade of the Catedral de Oaxaca. The 16th-century Templo de Santo Domingo church has a rich baroque interior and an adjoining former convent.

Forsyth MO, - the first quest that came to my mind when I did a quick stop to check out the fairly new Mexican restaurant and bar located at 15553 Hwy 160 (near the intersections of Hwy 160 and Coy Blvd) was not about the food but the name OAXACA?? Ergo, see the opening statement.  Cool and so THEN I wondered about the food and just what sort of libations were to be had.  When I entered, I asked the clerk if I could have a take home menu. She promptly handed me one of the most elegant menus I'd ever laid my eyes on!

Note that the menu pages shown had items and prices that were accurate at the time I posted this blog. Like everything, they will likely change with time!

The other question I had concerned alcohol. What a surprise, they also had a side room that sported a minimal bar along with a few tables scattered about. How nice. I was told that they served both hard liquors as well as an assortment of beers. They even had a large flat screen over the bar area to enjoy! 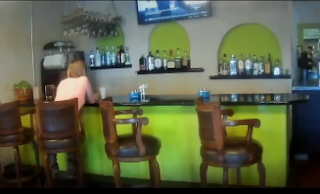 My opinion after my initial take, was that this could well turn out to be a popular venue for locals and visitors alike!

Be sure to check out my coming review of the food when I go there for lunch! That's coming soon!