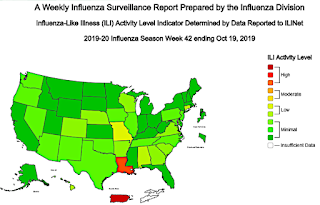 Taney County Missouri - Week 42 of the flu season for 2019-20 was Oct 13 to Oct 19. Still very early in the going as the flu normally peaks in late January. That said, some states including Missouri have seen a definite uptick in the number of cases.

Above is a graphic taken from the CDC report. It indicates that the number of individuals reporting showing up with symptoms of the flu at state clinics is above the 'baseline' or what is normally observed for the time of year.

The message here is very clear - please consider getting a flu shot!
Posted by Dan Owen at 9:49 AM No comments:

Tommy James and Crimson and Clover!

A song for those who were there, at the time and who survived! This is the long version, by the way.
Posted by Dan Owen at 8:33 PM No comments:

For some strange reason, I had developed a hankering for some hash browns for my breakfast, and after a bit of searching at the local grocery store, I was able to locate a package of Ore-Ida hash brown patties in the frozen food section.

When combined with a side of scrambled egg and some jellied toast, I had made myself what amounted to a pretty decent repast. (And yes, that brown stuff on the hash browns is A1 sauce - Something I'd encourage everyone to try at least once).

The hash browns can be prepared in a number of ways, but I chose doing them in my toaster oven set to 425 degrees for 15 minutes. The end result was very tasty.

Next week I plan to prepare fried applesauce on the grill! Do stay tuned!
Posted by Dan Owen at 8:10 AM No comments:

Our Presidential choices are coming more into focus..

Another slapped together work by me - I did want to draw some attention to candidate Warren as she's probably the best the Democrats currently have to offer... Sadly, she's only slightly less insane than those she's running against on that ticket.... [Background song credit to Veela and that Mic Jagger guy.]
Posted by Dan Owen at 1:31 PM No comments:

Have you gotten your flu shot? 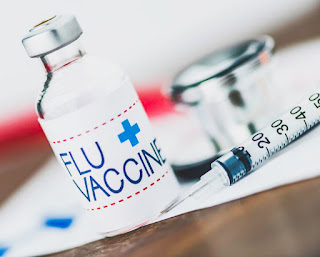 It's only mid October and already clinics are bracing for flu troubles as cases are already on the march upwards! A recent article, I read, cited - 'It is officially flu season and doctors said one strain of the flu is expected to be especially severe this year. That strain is called the H3N2 strain. This year, flu season is expected to last from October until May.

Doctors recommend getting the flu shot as early as possible. Anyone who is older than six months old can get a flu shot. It is scientifically proven to help protect you. The vaccine has an inactive virus that helps your body build up immunity to the flu.

Fatigue, coughing, a runny nose and nausea are signs of the flu. Doctors said the best way to avoid getting sick is to get a flu shot.

"I would say it's not only protective for yourself, but also protective for other people who might have chronic illnesses who might be at risk to get the flu," said Ben Moss, a physician assistant at Grants Pass Clinic.' - Excerpted from KDRV.COM.


Some background on the H2N2 virus: 'Influenza viruses that normally circulate in pigs are called “variant” viruses when they are found in people. Influenza A H3N2 variant viruses (also known as “H3N2v” viruses) with the matrix (M) gene from the 2009 H1N1 pandemic virus were first detected in people in July 2011. The viruses were first identified in U.S. pigs in 2010. During 2011, 12 human infections with H3N2v were detected. During 2012, there were multiple outbreaks of H3N2v resulting in 309 reported cases.'

This is a tough little swine virus, in my opinion, and I'd urge everyone to consider getting a shot this fall. Remember it takes about two weeks for a person's immune levels to ramp up, so the earlier you get a shot, the better!
Posted by Dan Owen at 10:06 AM No comments: 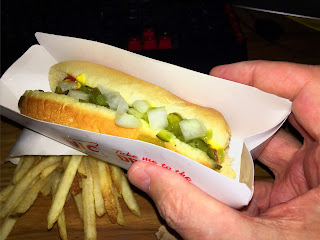 When compared to some other fast food joints (McD's comes to mind), Sonics located in Forsyth MO is still a pretty good deal!

I stopped there on Thursday, October the 10th and ordered an All American Dog along with a medium order of fries. I like this location, not only for the fair prices (my meal cost only $4.75 with tax), but also for the fast and efficient service.
Posted by Dan Owen at 2:23 PM No comments: