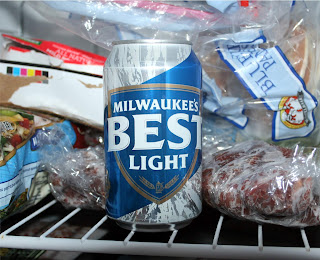 My final moment of inspiration for the day, came when I decided to use a regular thermometer to sample a fresh beer every 15 minute by pouring it into a glass and then drinking it! So saying, I loaded a case of beer into my freezer and started the clock. After making only about a dozen measurements, I forgot all about what I was doing and woke up the next day with a very bad hangover.
Posted by Dan Owen at 1:18 PM No comments: 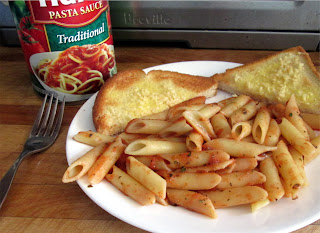 Let me see... I'm was still on a diet, and so, what would be great to have for lunch? Ah yes, a nice plate of pasta!

Strange as it my sound, a working diet requires that sometimes you cheat! Cheating accomplishes two important diet points; 1) cheating allows you not to go insane! And 2) it keeps your metabolism guessing as to just what that crazy owner was going to ingest next!

Today, the culinary delicacy I planned to prepare was Penne Mostaccioli (or Penne lisce if you happen to live in Italy), which is just one of over 600 forms that pasta shapes can take! I enjoy the smooth variety of Penne. Next week I plan to go with a plate of small Conchiglie just for grins!

For the all important sauce, I used Hunts along with a pinch of oregano and red wine! And what about the carbs and cals? I don't do that anymore! My new slogan is 'Live Large'!

In the riot of events that surround each individual's brief existence, there is a commonality of spirit that transcends and that supports us, as we all seek gratification, supplication and even perhaps a holy verification of those moments of time. A passage of many seconds in which we did stand strong upon this earth, and then grew older and then passed on. My thought is that no infant, no child and no adult EVER escaped our Fathers loving gaze... https://youtu.be/dSF9cwWj5ss
Posted by Dan Owen at 9:25 PM No comments: 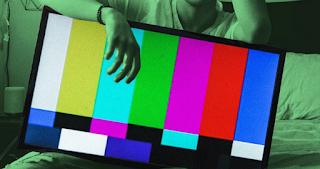 According to an article written Jared Newman at the 'FastCompany' site the regular purveyors of mass media (satellite and cable) are losing customers in record numbers, 'Once again, traditional TV providers had their worst quarter ever, as 1.1 million homes cut the cord in Q3 2018'.

That line caught my eye and I began to question why I needed to watch while paying in excess of $100 per month for the privilege! Much of the new stuff being shown was either Fantasy Island or just plain old crap while the other offerings I could easily get via other means on the net. The one channel I did enjoy watching – Fox News was also getting increasingly inundated with crappy commercials. On the spur of the moment, I sat down to document about a half hour of programming. I recorded 25 commercials in just 30 minutes. In general a new segment would run for something like five or six minutes before jumping off to another round of products I'm really not interested in.

Seriously, I could count on the fingers on one hand of products I'd bought as a result of seeing a commercial. In general, I shop sites like Amazon, look at the reviews and then make a decision. I don't do drawings (Publisher Clearinghouse), support charities (as many are scams), don't do life insurance (no family), already know what restaurants I like, skip the fitness stuff (that's another story) and flatly refuse to listen to anything concerning meds - I want info, I'd  ask a doctor!

The bottom line is that I can see a lot of TV for free via a regular antenna, opt to watch over streaming net or sit back with a good movie via Amazon Prime of which I'm a member. Now... I needed to figure out what to do with an extra $100 per month!