Great songs and songwriters, unlike some other shiny things, never rust or grow old...
Posted by Dan Owen at 7:46 PM No comments:

Email ThisBlogThis!Share to TwitterShare to FacebookShare to Pinterest
Labels: Forsythkid, Meatloaf, Songs, Two out of three

America doth seem a little more numbed and dumbed down today, me thinks. We all seem to exist now very divided, courtesy of the Dark State! Hey everyone! No more excuses! Our Republic is receding on the horizon... God! Please send money, guns and lawyers! No wait! Fuck the lawyers! Send a lot more booze!
Posted by Dan Owen at 6:53 PM 1 comment: 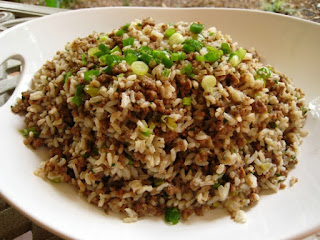 On a whim and also partly based on the recommendation of a friend. I picked up a box that was labeled 'Creole Dirty Rice Dinner Mix'. My friend had positively gushed about the wonderful mix of ground beef, onion, bell peppers and white rice. I figured 'what the heck, it couldn't kill me'~!

The next day I decided to throw the meal together. All that was involved was browning a pound of ground beef, draining off the fat and them adding the package contents along with 2 ¼ cups of water to a large skillet. I then stirred it all up, placed a cover on the skillet and then simmered the entire meal-a- deal for about 25 minutes.

After sitting down to a rather excellent meal, I noticed that perhaps my supposed 'friend' had it in for me, as I took stock of the nutritional content.... This was definitely not a meal for the faint of heart!

I noted that a 136 gram (4 ounce) meal wasn't really all that much in volume, but whoa boy, it sure packed quite a wallop in areas that I tended to shy away from. That 960 plus milligrams of salt, for instance, was way over the top in my opinion. In addition the saturated fat and cholesterol contents were way high for a older man such as myself who's trying to avoid cardiac collapse... That said, the meal as really tasty and so next time, I plan to cut the portion down in half and then maybe sub in a salad.

Copyright restrictions aside, this number by Madonna was posted for three personal reasons; 1) I've always respected Madonna's talent and 2) this number struck a chord of past times best forgotten. Lastly and most troubling, true Lycans transfer their ethereal bonds mouth-to-ring onto a willing young man's innocent finger. That did happen. And that bond, my friends, is forever...As an aside in 2017, I really do not like this song, or Madonna... It sucks to be me... Well, OK Madonna is pretty cool and our addictions are what they are... I guess....

I uploaded this number from the distant past, not as a song, but as a reminder to myself. You see that lady taught me a lot about myself. Back then, I thought of her a vacuous empty headed cheerleader who was trying to make a name for herself. Later, I realized that this talented woman was way up there in the intelligence quotient. (Perhaps, even much more knowledgeable than moi). That was a mental setback, for me somewhere there in the 80's. Now, cycle forward a few decades, and while I'm not much the wiser, I do so much clearly now see this awesome woman!
Posted by Dan Owen at 6:48 PM No comments: 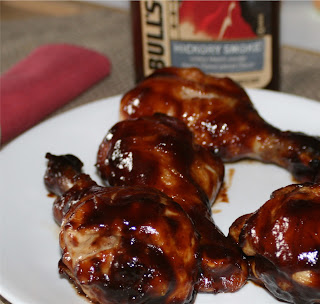 Initial Prep: Rinse, pat dry and throw the chicken onto an 'elevated' drip pan (so the grease can drain), and then 'roast' them in a preheated convection oven, set to 390 degrees for about twenty four minutes.

Da Sauce: Place about a cup of BBQ sauce into a small pan on the stove and bring to a boil, then reduce the heat to low and simmer while the chicken roasts. (It’ll get nice and bubbly and wonderful). When the chicken’s ready, turn off the heat and remove the pan from the burner.

Back to the Chicken: After the chicken has roasted 20 minutes, crank up the broiler to high and broil the chicken for 5 minutes turning once, just to give it a little color. Then, remove the chicken from the oven, and reduce the oven temperature to 350 degrees. (Even though the chicken was actually done at this point, I was going to return it with sauce added in just a second).

Setting the sauce: Use tongs to dunk each chicken legs into the sauce, submerging each piece completely. Place the coated chicken back onto the pan, then return the chicken to the oven for five minutes, just to anchor this base of sauce onto the chicken.

Cook's Notes: I used a Breville convection oven with the rack set in the roast or mid position. For broiling I raided the rack and set the heat to 500F. The legs were broiled for about 7 minutes and rotated once.

The legs were then immersed in KC Masterpiece sauce and returned to the oven with the rack set on the center position. The temperature was lowered to 350 degrees and the legs were cooked an additional 7 minutes. The internal temperature, done by probe, registered 168 degrees. The legs were then removed from the oven and placed into a refrigerator to cool..

The Senior Center Thrift store is open for business! 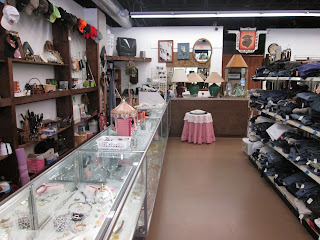 Forsyth MO – Located in the back of the White River Plaza off Hwy 160 is the Senior Center Thrift Store that is open Monday through Friday 9AM to 5PM and Saturday 10AM to 3PM. I stopped by as I was doing some laundry at the adjacent laundromat and was curios to see what they offered. 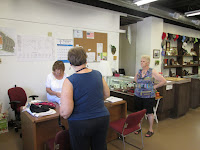 Inside the store, I was met by some very nice ladies who told me that the proceeds or profits from the store were going to help build the planned new Senior Center as soon as the funds became available. I was impressed with the great selections they have of clothing (some racks held clothes that were as little as $1 as part of a sale), shoes, curios and jewelry just to name a few.

Disclaimer: All data & info provided on this site is for informational & entertainment purposes only. The owner of this site makes no representations whatsoever as to the accuracy, completeness, suitability, or validity of any material presented here & will not be liable for any errors, omissions, or delays in this information or for any losses, injuries, or damages arising from its display or use. All information is provided on an as-is basis.

Lou Raymond at the Frosted Mug! 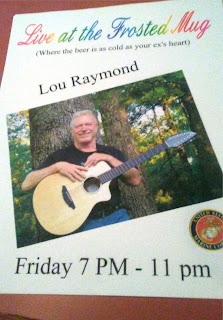 Forsyth MO - On Friday, July 7, the Frosted Mug will be hosting musician Lou Raymond from 7PM to 11PM. A show that some I talked to called 'unique'. I planned to be on hand to see this show even as it was going to be way past my bedtime.... Lou is a Vet who currently resides in Protem MO. He told me that he has been performing at the Mug, off and on, for decades.
Posted by Dan Owen at 8:03 AM No comments: