Whenever I've worked with pasta, one sticking point has always been the 'amounts' shown as a suggested serving. For instance, on a package of American Beauty Penne Rigate, the recommended serving is 2 ounces or 56 grams or 3/4 cup. This was 72 pieces by count b-t-w. But, are they talking dry weight or cooked weight as there is quite a lot of difference! Other sites, like one on Kraft, have tables that are supposed to clear things up; 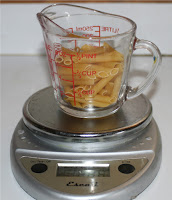 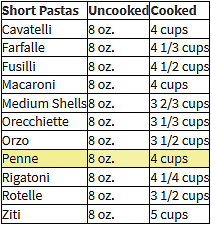 So, 8 ounces of Penne results in 4 cups of cooked pasta at least according to Kraft. Which would translate to 2 ounces making up about 1 cup, (not 3/4 cup). Yes, I was more confused than ever. So, I decided to weigh out exactly 56 grams, cook it and then weigh it again after draining. Wow! Right off the bat, I noted that 56 grams measured out as 3/4 of a cup! OK! So, right there, I knew that with American Beauty they're talking dry weights!

Next, I wanted to see what sort of volume the cooked pasta would have.... 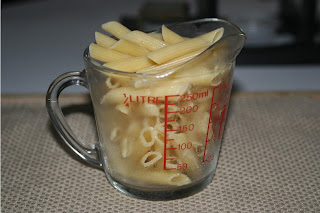 OK! About a cup! These noodles went into my luncheon post where I looked at the nutritional analysis!
Posted by Dan Owen at 11:50 AM