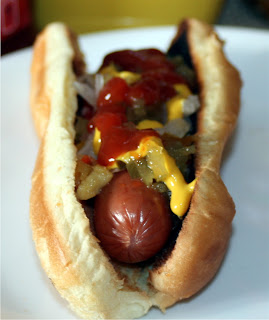 'Every man is really a boy inside and every boy likes to experiment to the point of distraction...'

Some time ago, I did a post on what I called an 'Atomic Hot Dog'. It was basically a plain Jane affair that I bombed with some diced Habanero peppers. As these peppers are one of the hottest known to humankind, all I did was to blister my mouth rather severely! That was definitely not what I was looking for!

This time around, I opted to mellow out the heat, just a tad, by forgoing the Habanero route in favor of something of a milder persuasion. So, for this test, I decided first on visiting my local grocery market to see what they had to offer. As it was just 22 degrees outside, I bundled up pretty well before venturing out. You see, I'd discovered years ago that I got slower, depending on how low the temperature got. (After doing a bit of math, I determined that somewhere around 4 degrees above zero, I would likely lock up all together)! On this particular day in January, although I shuffled around like an old man returning soup to a kitchen, I made the trip OK. 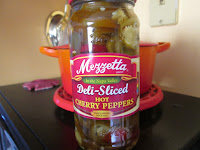 At the store, I discovered a jar of deli sliced hot cherry peppers that looked like they might be rather tasty while not being too hot. While I was there, I also picked up a package of Ball Park buns. The frankfurters were already in my fridge – Oscar Meyer Jumbo franks! Those, along with some condiments and relish and I was all set! Allez cuisine!

One would think that slinging together a hot dog would be a breeze, and you'd be right if you weren't me! I like to make the simple, complex and the complex impossible! So, saying, I spent a good hour figuring out;

Proper bun heating.
Prepping those condiments!
&
The correct method of heating your wiener!

Handling those buns – No one I know particularly likes eating a cold bun. Buns are supposed to be warm, brown and something you can really sink your teeth in! To that end, I like to give my buns a quick do over in a convection oven.

The condiments – In order to insure the maximum taste impact, I typically throw a teaspoon of sliced onions into a food processor with a like amount of hot peppers. The resulting mush insures that whatever heat therein that exists while hot my mouth all at once. To this mix at the last minute, I'll typically add a small amount of pickle relish, mustard and ketchup.

Getting you wiener hot – OK, everything was in readiness with the exception of that wiener. Should it be pan fried, microwaved or boiled in water? Heavy questions those. Personally, I generally opt to heat mine in some boiling water for about five minutes before slipping it quickly into a hot bun that's been lubed up with the aforementioned condiments....wait...what?

Well, this 'creation' proved to be way too time consuming even as it was very tasty! Thanks goodness it only cost about a buck and came in at ~275 calories! And finally, on a nutritional note, frankfurters are a real diet no-no. They contain corn syrup, salt and high levels of saturated fats! So, consume sparingly!
Posted by Dan Owen at 11:21 AM