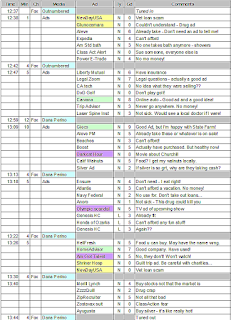 It amazes me that as an otherwise intelligent citizen, I actually spend good money to a cable company, just so I can be assaulted with lots of advertising and very little real programming! I took a day, when I decided to watch a bit of Fox News where I began at a random time and then proceeded to grind on through a complete hour. It was eye-opening.

In that short span of time, I got the great privilege of watching 39 advertisements! Of those, I felt just 3 were OK or of some use. The rest of them ranged from mediocre to blatantly horrific (my opinion). The truth be told, I've rarely purchased anything as a result of seeing the product or service on the tube. Like most Americans, I go by word of mouth, seek local talent and visit my town's stores. Duh. I don't have thousands of dollars to take expensive vacations, I don't need people laying guilt trips on me and for God's sake. Good charities like the Red Cross don't advertise much - so think about that. And, if buying Gold or Silver were such great deal - how come companies like Augusta (I misspelled it in the graphic above) want to take my 'worthless American cash' for their precious metals. I just don't get that..... I also have decided that I more than likely could better spend my time in other pursuits. When my contract with Mediacom expires in a few months, I'm cancelling the TV portion....
Posted by Dan Owen at 2:02 PM

Email ThisBlogThis!Share to TwitterShare to FacebookShare to Pinterest
Labels: Ads on TV, Canceling Mediacom, Forsythkid, money for nothing, opinion