Just imagine an asteroid that is larger than the world trade center in NY crashing into the earth! NASA scientists state that the consequences of such an event would be 'dire'. Well, just such a space rock, dubbed 2002 AJ129 will be thundering by our planet on February the 4th, cruising along at about 67,000 mile per hour! Comparing that speed to a speeding bullet traveling at 1700 mph give one the idea that this mother is really in a big hurry! 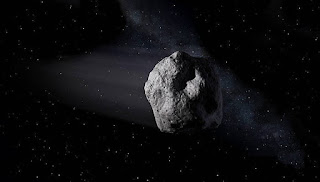 Although the rock will almost certainly not collide with us, as long as it remains within its current trajectory, scientists have previously warned that such an impact could have a dire impact on our planet. (It's been recently noted that some asteroids can experience sudden and explosive out gassing events that can and do change trajectories of such 'astro-bodies' in unpredictable ways)!

"These would not be pleasant times," Charles Bardeen, of the National Center for Atmospheric Research said during a presentation at the American Geophysical Union (AGU).

A 2016 study found that the impact of a slightly smaller space object would bring about a mini Ice Age. Temperatures would fall across the planet as much as 8 degrees Celsius. The effects would last for several years, leading to potentially severe devastation around the globe, not to mention the havoc caused by the initial impact.
Posted by Dan Owen at 4:45 AM