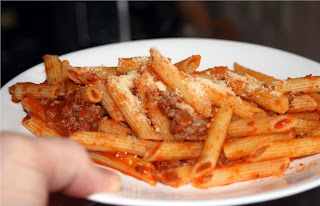 So, it was a Friday in late January. I was cold and when I get cold, I also get hungry. The 'fly in the ointment' [Likely source is a phrase in the King James Bible: Dead flies cause the ointment of the apothecary to send forth a stinking savour. (Ecclesiastes 10:1) For five centuries, 'a fly in the ointment' has meant a small defect that spoils something valuable or is a source of annoyance] was the seemingly forever diet I'd been on for a number of centuries...

I'd just finished a breakfast I termed E-PLT and was already 285 calories in hole that held only 1400. and, with a seemingly endless number of hours yet to go, I did the one thing any man is capable of doing when under stress... I ignored the facts and went for the gusto!

In my case, gusto translated into pasta – one of the few foods I turn to in times of need. A plate of steaming Penne translates into comfort food taken to the max. I had to have some and as the 12 o'clock hour approached, I found myself heading for the kitchen... Earlier, I had thrown together a quick planning spreadsheet to estimate my meals as to their caloric content. For lunch, I had estimated I had about 400 calories from which to work with. That said, let's see how well I did...

OMG! Pretty well under that 400 mark wasn't I! So, being a guy, I added in a really 'tiny' slice of garlic bread (not shown) to make everything a little more Italiano! All in all, this was a great lunch time repast and I still had a nice salt laden Banquet entree to look forward as well as those brewski's!

Wait! You might have noticed that the sauce may have had something 'extra'. Honestly, I had no idea of what that foreign matter could have been.....
Posted by Dan Owen at 11:48 AM