Making a rump roast in a slow cooker! 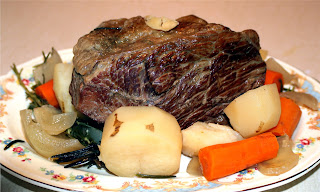 The problem: I wanted to cook a rump roast in my slow cooker, yet most recipes refer to cuts of meat in the 3 to four pound range. My little roast came in at only just over 2 ½ pounds.

In general, cooking a roast is pretty much a no brainer. You sear it over medium high heat in a frying pan to brown it and then you dump it into a Dutch oven along with some carrots and potatoes with just a little bit of water and wine and then throw it into an oven set to 350 for about two hours. No big deal….

However, after doing some research, I came across this slow cooker recipe and instructions: 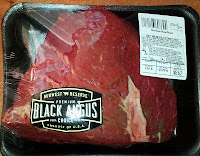 OK, I thought to myself, I’ve got most everything listed here, so let’s give er a go! Note: I did modify the original recipe for some items (won’t say which ones) to accommodate what I had on hand and to suit my personal tastes). The slow cooker used in this preparation was an old three quart model made by Rival.

After 3 hours of cooking on high, I decided to check the contents of the slow cooker to see how things were going….. (I figured if either the meat or the veggies were not done, I’d dump them into a Le Creuset and finish them off on the stove top). Instead, I reduced the heat to the low setting and went 2 more hours at which time everything looked good to go. 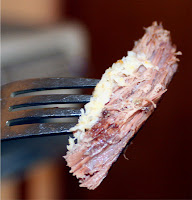 The end result was pure ambrosia! The roast came apart using just my fork!  And, with a little bit of Horseradish I thought I was in pot roast heaven! Serves 4 (see note).

Note: If a mistake was made here it's that next time I might need to add maybe two more potatoes along with two or three more carrots! Then, I might have enough to serve 5 or 6!

Update: It's about time to make this again! It's November 2015 and I've just moved into a condo. I'll publish a link here as to what happens!
Posted by Dan Owen at 4:35 PM