The house on a hill. 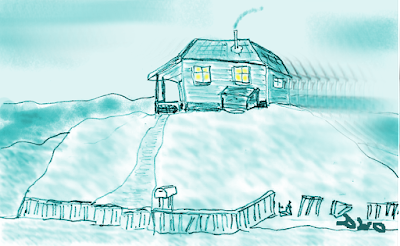 Somewhere in the US - It was 1:45 AM, an insane time for anyone to be awake, much less an aged man. But, I was shivering, even as I was deep under the covers. 'Did the power fail', I wondered as I opened sleep filled eyes and attempted to concentrate.  A glance at my La Crosse thermometer, next to my bed, read 69.4 degrees. I groaned at seeing that while realizing that a small night lite was functioning in a cherry fashion across the room.  Two small space heaters, one an oil filled radiator looking affair and the other a blower type were putting out heat, but it was woefully short of what was required. Outside, an uncaring wind blew through the crack and crannies of a home that was almost as old as I was.

Getting out of bed, I reflected back to the days, many years ago, when I happened across it at an auction. I was looking for a place and to rent, but sometimes fate steps in and changes ones life course. Sometimes for the better, other times for worse. On that fateful day, a small group of people were standing around an auctioneer who was well into his chant. It looked to be a very old house he was selling. I walked closer and could hear him clearly. 'Forty-forty-forty, can someone give me forty'? His high pitched voice a rapid jabbering that was a bit hard to understand and yet understandable at the same time. No one standing there really seemed interested, rather, they stared hopefully at the man as though expecting he might perhaps burst out into either song or tears. Either way, they seemed to want to stick around to the bitter end. It was at that precise moment that fate, the auctioneer and me collided in chaotic fashion.

Clearly exasperated, the auctioneer (whose name was Stan, I was to learn later on), shouted out 'Someone please just make me an offer!'

Never one to be caught off guard, I half jokingly raised my arm and said. 'I'll go ten thousand, sir'.

In the space of perhaps a few seconds, he looked at me. Swiveled around to take in the small gathering. Turned back to me and yelled, 'SOLD to the gentleman in the grey overcoat!' And just like that, I became a home owner. My days of renting now in life's rear view mirror. Only, I wondered what kind of home could one actually buy for ten thousand dollars... [to be continued]...
Posted by Dan Owen at 9:58 AM No comments:

Email ThisBlogThis!Share to TwitterShare to FacebookShare to Pinterest
Labels: Fiction, Forsythkid, The House on a hill

The audio track was from an old movie, Jesus Christ Superstar. I had the thought to storyboard a comparison of the 'trumped up' (pun intended) trial that Jesus endured and what is happening today. Evil and good, have fought for human souls since time began. Two millennia ago, we managed to crucify and put do death an innocent man. My question, in 2019.. Are we repeating that act yet again? And yes, I know that Trump is no angel, but then again what are we?