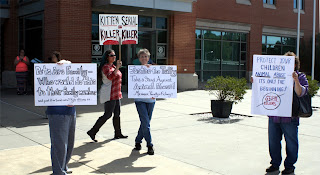 Forsyth MO. – Thursday, September 29, 2017 was the date that authorities had set for a courtroom hearing concerning Kyle W Williams; one of two men who have been accused of the death of a kitten by means of torture – The specific charges were; Animal Abuse - 2nd/Subsequent Offense Or By Torture And/Or Mutilation While Animal Was Alive along with a separate charge of Armed criminal action, both considered to be felony charges. See video: https://www.facebook.com/altaann.bivens/videos/10154680371966106/

The gruesome nature of the killing and methods used to torture the kitten to its death, (a video of which was posted on Facebook briefly before being taken down), has raised a great amount of ire in the community as the protesters signs would seem to indicate. Mr. William's attorney has filed both for a change of venue and another trail judge in the previous month. No word, as of yet, of how the hearing went down. www.taneyweather.com
Posted by Dan Owen at 1:35 PM