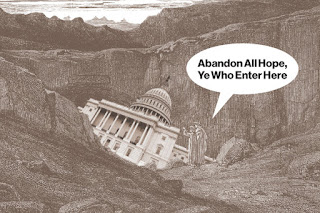 Scientists often use a word called the 'action'. It describes something that moves. Congress has a similar word they like to also use quite often.... inaction!

OK, so after giving up on the repeal of ObamaCare, the Republicans have now set their sights on tax reform. The plan, as outlined in the framework, nearly doubles the standard deduction to $12,000 for individuals and $24,000 for families. This basically increases the amount of personal income that is tax-free. The plan also would collapse the number of personal tax brackets from seven to three. By simplifying the system, most Americans would be now be able to file their taxes on a postcard, or so the plan would indicate.

And while there are some other 'gee whiz' pieces and parts, I can almost hear many a Democrats teeth grind at the thought of even slowing down the gravy train a tad, has got their collective panties in a twist! You see, after working so hard to thwart the President's agenda at every turn, many on the Left are beginning to drool at the thought of taking back both Houses in 2018 and maybe even the Presidency come 2020! (Sabotage, like vengeance are meals both best served cold, and the Democrats are past masters of both)!

So, onward we will then go, everyone. As fall turns into winter, more and more of us will be left in the cold, standing on the outside of a clinic unable to get in. And, as system after system begins to fail, in earnest, only the shouting of politicians will be left. First up will be the ever declining level of healthcare Americans will receive, followed by failing entitlements, as the money to fund them also dries up. (You all really didn't think we could carry a 20 plus trillion dollar debt with NO consequences, did you)? www.taneyweather.com
Posted by Dan Owen at 11:14 AM