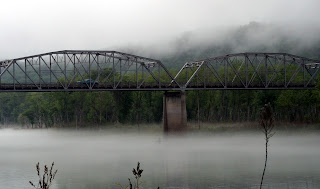 Forsyth MO. – It was more out of curiosity more than anything else, that found me attending a public meeting held at the Forsyth High school cafeteria on a Thursday, September 7, at 4:30 PM. The topic of the day concerned the Bull Shoals bridge project and roundabout that were slated to start very soon.

The $10.4 million dollar bridge in addition to the construction of a $1.4 million dollar roundabout were both scheduled to be completed at by the fall of 2018. I had the gut feeling that work of such magnitude was definitely going to impact travel times for anyone wishing to cross the Bull Shoals river. However, one of my concerns was about something I had read in a local newspaper and on the MODOT site which stated that Highway 76 was going to be closed at the bridge site for two weeks when the final changeover from the old bridge road to the new one was made late in 2018! (This same thought was also apparently on the minds of others who attended).

I arrived at the school at about 4:10 PM. At that time there we not too many vehicles in the lot and even fewer people in the cafeteria, perhaps about 15 or so. But, by 4:30 PM that number had swelled to well over 100! Sadly, I did not hear the name of the Lehman Construction representative out of California, Mo. An engineer (not an employee of MODOT) who was chosen (thrown under the bus?) to answer questions concerning the construction phase of the bridge. After making a brief introduction and overview of the project, things quickly went downhill (my opinion) as the crowd seemed more focused on the fact that Highway 76 was going to be closed for up to two weeks towards the end of the construction phase next fall. One individual kicked things off, not by asking a question, but by launching into a diatribe against MODOT. According to this individual, the two week closing was all about MODOT saving money at the expense of the people's convenience. (A statement that I felt was inappropriate and addressed to the wrong individual. Such questions would be much better answered by a company Public Relations officer, not an engineer)...

Very quickly the 'open meeting' went downhill (my opinion) to the point when another representative, a women that did work for MODOT, made a proposal that those who wanted to talk budgeting issues could move to another room! At which point, about half the people got up and began to move! (Such was the chaos, that I was unable to figure out which group was which)! And frankly, I was losing complete interest just fifteen minutes into the meeting! After all, budgeting issues had been settled years before the awarding of a contract to Lehman as one of a number of competitive bidders. So, I left out a side door and didn't look back....

For those who would like to see concept renderings; See Bridge Map and Roundabout Map!

An aside by me: MODOT is not our enemy. MODOT is a government agency that works with the public, transportation partners, state and federal legislators, and other state and local agencies to provide a safe and efficient transportation systems to the people of Missouri. MODOT is trying its best to replace an aging bridge structure that spans Bull Shoals (completed back in 1951) in a manner that is as conservative in terms of cost as is possible. This is a major project that will be sure to inconvenience motorists and emergency personnel, especially during the projected two week period when alternative access and assets will have to be addressed. Complaining serves no purpose whatsoever. Men and women coming forth, at meetings like this, with viable solutions would be much needed and preferred. In the end, the bridge and roundabout will be built. After a few years, no one will even remember the hassles, delays and traffic problems. But, I do predict that the number of complainers will far outweigh solution providers in future County projects...
Posted by Dan Owen at 8:27 AM