A plot to kill Kim Jong-un? 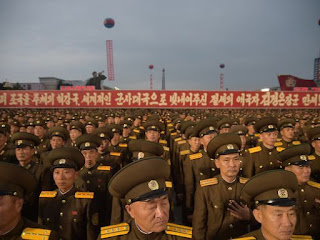 Why make such a plan public? More than likely it is just another form of deterrence that doesn't involve the threat of using nukes. Still, I do like the concept and am betting that within the upper ranks of Kim's dictatorship, there are some people close to him who would not mind seeing his head rolling down the capitol steps. I think that the real question, now that very tough sanctions are kicking in, will be just who will throttle Kim first?

In addition, recent UN approved sanctions have accomplished six major goals: cap North Korea's oil imports, ban textile exports, end additional overseas laborer contracts, suppress smuggling efforts, stop joint ventures with other nations and sanction designated North Korean government entities, according to a US official familiar with negotiations. The effect of these and other moves will reduce imports that the starving masses desperately need by 90%! so, I'm guessing that internal protests may become violent in record time. Were I Kim, I'd be making plans to move to Siberia post haste! [www.taneyweather.com]
Posted by Dan Owen at 11:51 AM