Banning the cigarette! Has the time come? 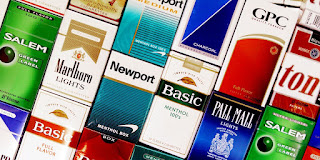 Humankind, over millions of years of evolution, has always managed to find ways to harm themselves through the application of various and sundry drugs. (Of course, that also depended on how much leisure time there was to be had). Ten thousand or more years ago, during the Paleolithic times, we were not as tempted as life was a struggle just to live from one day to the next. As a species, we had only a few life threatening hazards back then; predation, starvation and 'accidents'. (Under the term 'accidents', I would include being hit by a rock or jabbed by a crude spear as we have never seemed to get along with one another for very long). Yet, for all that, the average Paleolithic man or woman was extremely healthy! Tooth decay, heart disease and cancer were completely unknown to those people. True, part of the reason was the fact that we didn't live very long as even a small nick of the flesh often resulted in life threatening infections. That said, while we did 'live', we lived well...

Flash forward to the 21st Century and now look at the means we have of harming ourselves; too many calories and too little exercise have increased mortality rates in an alarming fashion. Combine that with our utter fascination with drugs in the form of; prescription medicines, alcohol, antibiotics and nicotine and you have a recipe for a not so very healthy lifestyle. And, while it's true that we all have an inherent right to destroy our bodies in the manner of our choosing, what is not true is when we inadvertently kill others around us... And, that is the topic of my post for this day. 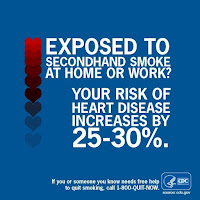 Of all the things the average human does that is personally harmful such as overeating, not exercising and filling their bodies with junk foods, only cigarettes and the secondhand smoke they produce stand out as being a clear and present danger to unsuspecting nonsmokers standing around them. The picture from the Center for Disease Control, at right, says it all! Heart disease is a silent and  very effective killer. Did you know that about 610,000 people die of heart disease in the United States every year–that's 1 in every 4 deaths. Heart disease is the leading cause of death for both men and women. More than half of the deaths due to heart disease in 2009 were in men. And, if that were not bad enough, you've also got lung cancer which is the leading cancer killer in both men and women in the U.S. In 1987, it surpassed breast cancer to become the leading cause of cancer deaths in women. An estimated 158,080 Americans are expected to die from lung cancer in 2016, accounting for approximately 27 percent of all cancer deaths. And guess what, many of those who are dying lived healthy lives and didn't smoke! My guess is that some of them are being killed, over time, by the silent death coming from the exhaled smoke of others around them! Fortunately, the movement to ban cigarettes and cigars has begun to gather some momentum here in the US as businesses and even towns have outlawed their use. Good for them! But, it will be a hard fought battle! As a smoker of many years, I can attest fully to just how horrible the addiction to nicotine can be. As of this post, I've been smoke free for almost 17 years, but still yearn for the 'good old days' when I'd work myself through three packs a day! Yet, little did I realize back over those years, that I was still being exposed! Second stream particles are real killers! The AMA has found it to be many times more dangerous. So perhaps the time is drawing near, when more and more people will realize that moving towards a more healthy lifestyle will not only benefit them, but those around them as well.
Posted by Dan Owen at 10:12 AM