Where will Irma track? 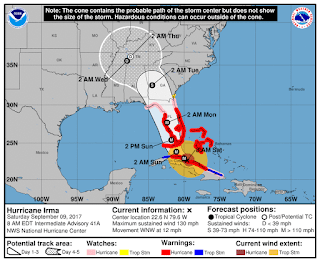 It was early on a Saturday, September 9, 2017 and the projected path of Irma was coming into clearer focus. Hurricane experts were still projecting a turn of the path of the storm to the north at any time. They're watching this closely because, heaven forbid, that the eye of the storm wander a bit more to the west where it could stay over warm open ocean! Such a scenario would not bode well for the soft underbelly of the Gulf. Later on, even states like Missouri could be impacted, once the center of low pressure moves inland. In any case it looked as though the state of Florida was going to be raked from end to end over the next couple of days with damages in the billions of dollars! 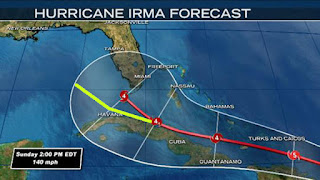 As many media observers can attest to, the actual track any hurricane will take is, at best, good guesses. Here, I've spit the difference with a track more to the south that would result in an entirely new scenario. And no, I don't think that New Orleans would be at risk, as the steering winds should quickly push the system northwards by sometime later on Saturday. What would be more certain should it stay to the west of the Florida mainland, would be a re-strengthening of the storm to a Cat 4 or 5..... Tracking as of the Sept 9 10AM CST update! 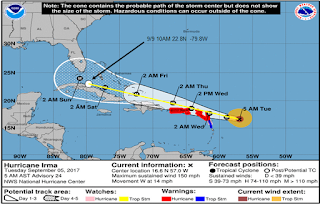 And then there's still Jose which had just become a Cat 4 storm....
Posted by Dan Owen at 8:18 AM