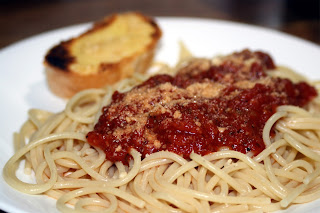 As I was at the tail end of a failed diet, I figured what the hell. I might as well cook up a nice plate of pasta with French garlic bread on the side. (Women really dig fat old guys, right)?

The recipe shown here was copied oh so carefully from an old Italian recipe. I then immediately did a total hatchet job on some of the ingredients and most all the amounts. (Did that mean I was a better cook than some old Italian master chef? Heck no, it meant that as a real life screw up, I thoroughly enjoy screwing up other things around me as well)!

Procedure:
I start off with a Le Crueset 2 quart mini pot. I add the oil and then heat it under medium heat for about 30 seconds. I then add the chopped onion and saute for these about 10 minutes until translucent, not burned. Next goes in the garlic for another two minutes after which I add in the black pepper, green peppers, basil and the tomatoes. (Note that the tomatoes had been blended in a food processor to a fine consistency). This mixture is brought to a slow boil, stirring often for a minute or so at which time the heat is reduced. The contents are then simmered, uncovered for about an hour after which time the contents are dumped into a slow cooker set on high for about two hours. Towards the end of the cooking cycle, I add in the cheese. Makes about 8 servings!

Notes:
Like most of my 'creations', this deal did not come together in exactly the way I had imagined. The 'tomato sauce' was already thick right from the can, and so, I pretty much skipped the step where it simmered uncovered for an hour. It all went went right to the slow cooker (I did saute the peppers and onion), set to high for three hours!