A new use for Health Choice steamer baskets! 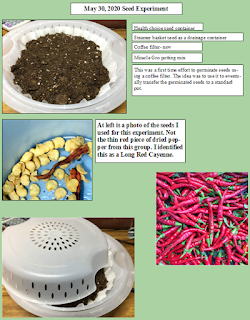 I've often enjoy eating Healthy Choice Cafe Steamer products as they are great products, but had one problem with those two-part baskets. They always looked like they would be good for another use, yet I never could figure out one. So, over time, they accumulated in my cupboard.

Then, just recently, I had the idea of using a base with two of the baskets to set up an seed incubator. Crude? Yes, but it seemed to work! I used Miracle Gro potting mix, placed on top of a coffee filter as a medium in which to plant some seeds. I thought the coffee filter would work when I eventually transferred the seedlings to a conventional pot.

I'll see how this might work out and will post updates about mid June, when I expect the seeds to germinate.
Posted by Dan Owen at 5:10 PM 1 comment: 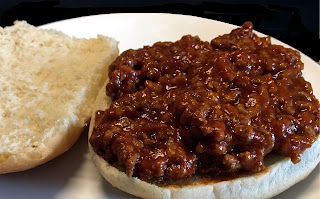 For many years, I've enjoyed making Sloppy Joe's at my home, whenever I got a hankering for a burger with a spicy kick! According to legend, a cook named Joe at Floyd Angell's cafe in Sioux City, Iowa, added tomato sauce to his “loose meat" sandwiches and the “Sloppy Joe" sandwich was born. A popular knockoff is the pulled pork sandwich, if made properly, that is.

Sloppy Joe's have a couple of things going for them that many moms and dads greatly appreciate; 1) they're cheap and 2) they're supper easy to make! I my case, I brown a pound of ground beef, drain the fat, then combine the meat with a cup and a quarter of water, canned tomato paste and one of the many mixes that are to be found at grocery stores everywhere!
Posted by Dan Owen at 11:48 AM No comments: 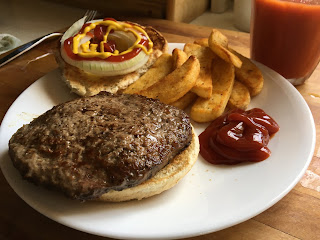 I'm the sort of man who like hamburgers and when I have a hamburger I also like them fries to go with it. As a result, I have often been forced to a fast food joint - you know the places that charge $7 and more! But now I've for an alternative...

While browsing a local grocery outlet name Save A Lot in my town of Forsyth Mo, I happened across a package of Red Robin steak fries and bought one on impulse. This turned out to be a good choice as the product was easy to prepare with a taste very acceptable.
Posted by Dan Owen at 1:29 PM No comments:

A delicate balance of a few billons tons of water! 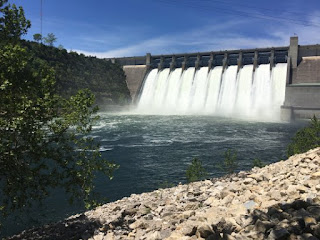 Forsyth MO. - For whatever reason (although I'll get into some in future blogs), the two bodies of impounded water controlled by the Army Corps of Engineers could just possibly get into trouble due to both recent and forecast rainfalls. First, some factual information;

[Source – Wikipedia] 'The original purpose of the reservoir was for flood control on the White River. The dam had been authorized a month earlier under the Flood Control Act of September 3, 1943. The reservoir has a fluctuation of 16 feet (4.9 m). When the reservoir is above the maximum flood pool, excess water goes over the auxiliary overflow spillway at the north end of the dam.

Table Rock Dam’s spillway capacity was evaluated as a result of a dam safety program in the 1990s. Using improved weather data and more modern technology and safety requirements, engineers determined that the lake would rise ten feet higher during the worst-case flood than previously calculated. An event of this magnitude would over top the earthen embankment and destroy Table Rock Dam with catastrophic losses in downstream areas, including Branson. To prevent the potential loss of life and property damages, congress approved and authorized construction of the Dam Safety Project. After considering several options and gathering considerable public input, an auxiliary spillway was determined to be the best solution. The auxiliary spillway was completed in 2005 at a cost of approximately $65,000,000.

The worst case scenario of a catastrophic floodwater discharge from Table Rock Lake using the auxiliary floodgates would roughly resemble this:

At elevation 931 Table Rock Lake is at full flood capacity. The ten Tainter gates are opened to accommodate additional lake inflow from the White River Basin including the James River and Beaver Lake discharge.

At elevation 937 Table Rock Lake is 6 feet above flood capacity. The ten Tainter gates are opened wider in an effort to stabilize reservoir rise. Outflow from the Lake under these circumstances will be nearing 200-300 thousand cubic feet per second (CFS).

At elevation 942 Table Rock Lake is 11 feet above flood capacity and at its "design pool", or the maximum elevation that the reservoir is engineered to reach, under "probable maximum flood" scenarios. The dam’s ten Tainter gates will be fully raised to their maximum height of approximately 30 feet letting loose 550 thousand CFS into Lake Taneycomo. This scenario would effectively submerge and destroy the powerhouse, power transmission grid, hatchery, and wreak serious destruction down stream.

At elevation 947 Table Rock Dam would be at its maximum capacity and water would be at the very top of the dam. The auxiliary spillway would be brought online, in concert with Table Rock’s fully opened floodgates. This catastrophic or "last resort" protocol releases 1 million CFS of lake waters into Taneycomo and deals dreadful destruction to Branson, Hollister, Point Lookout and possibly the Powersite Dam. At this point there is a danger of water over-topping the concrete dam and breaching the earthen structure, which imminently leads to cataclysmic structural failure and the uncontrolled release of the Table Rock Lake impoundment—nearly 3 million CFS of water.

As of May 23rd, the water levels were at;

Now while the smallest impounded Lake (Beaver) was doing OK, her two downstream neighbors were carrying a bit of a load. The biggest worry being Bull Shoals, currently at 693 feet or just two feet below flood pool levels. Note that 'flood pool' as defined by Law Insider reads;

This is the point at which a dam would be forced to start discharging 'against the will of those in control'. (Note that the Table Rock Dam level is at 926 feet with their flood pool set at 931 feet - That's 4 feet away)! Also note that when were are talking about the height of a body of water, we are referring to msl or height above mean sea level.

So, even though the coming week of rain only equals about an inch, the water game is certainly getting a bit dicey, to say the least! 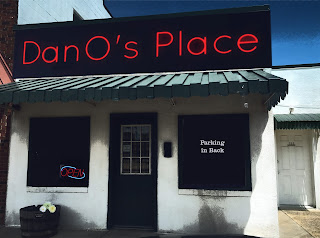 Talk about low places that are also small. I give you DanO's Bar and Grill! A 900 square foot enterprise that boasts a small grill serving up dogs, burgers and chips along with an assortment of drinks and brews intended for a local crowd!

This '21 Century concept bar' has a focus on being very efficient in terms of heating and cooling costs via limited space that only allows for fewer than twenty four patrons at one time. The interior is open with a micro-bar that seats 12 with tables that seat twelve diners.

This is my concept of 'winning' bar and eatery establishments going forward....
Posted by Dan Owen at 2:57 PM No comments: