Steak and eggs at home at a doable cost!

Making food stretch is what the current economy is, sadly, all about. One way I've tackled the skyrocking prices of beef, while also serving up a nutritious meal, has been to limit the portions. The steak pictured here cost $11 and change per pound, so I purchased a small steak costing $5 and which weighted about a third of a pound. This was cut in half to make two meals. The 'eggs' were made from Eggbeaters and so had zero cholesterol! This $3 breakfast hit a lot of marks for me; the cost, cholesterol, the price and even the calories were all in the green! Enjoy!

Obama's speech today on energy. Please watch, because you will be paying for it!

'I gotta give it up for the Prez and his retinue of Left Wing crackpots! They either all sport giant testicles or they are so crazy that the rest of the 'sane' population is snake fascinated and seemingly powerless to stop them!'

One Obama insider stated yesterday that the President's speech (later today on Tuesday, June 24), will focus on new 'controls on greenhouse gas emissions from power plants.' There is also said to be a plan that would boost energy efficiency of appliances and buildings, plus expand renewable energy. What probably will not be mentioned is the hefty price tag that will also be a part of this deal. Please note that whenever the President uses the word 'investments' in a speech, he is actually referring to increases in taxes that the average American will have to bear. (So if this passes, we all can expect large increases at the pump, for home energy and at the grocery store as a direct result of this series of initiatives).

But wait! There's more! Some Democrats like Rep. Henry Waxman, are calling for the implementation of regulations and their associated taxes, 'without the need to go through Congress' citing that it would take too long to push through otherwise! (Hey, after all, why bother with messy procedures when you can just shove stuff down a person's throat)!

But one has to wonder...is it even worth it to change the climate?

An interesting article in Scientific American, 'The Alarming Cost of Climate Change Hysteria' paints a rather dismal picture on the billions and billions that have already been spent, and questions whether or not any of this effort has really amounted to much of anything. (A poignant point considering the way in which some other countries, notably India and China, are thumbing their noses at the environment with no effective controls whatsoever).

[Ideally, climate change should be a global effort and not the patchwork mess it is today.... but, that will never happen. Not with 196 countries, each with their own objectives and most of whom have a hard time even getting along with their neighbors!]

I would encourage all Americans to watch this speech, or to read the text version that will be posted on the Internet, later in the day. Discuss it among your friends and then call or write your congress person and tell them how you feel. While I'm all for cleaning up the environment, I want to balance that effort with other needed functions like eating, heating my home and getting to work!
Posted by Dan Owen at 9:09 AM No comments:

Let's just go ahead and eat them! 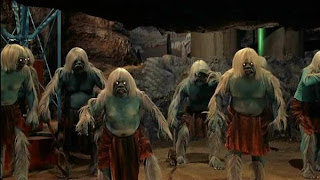 Please let me explain that title of this post! For starters, I'm personally all for giving President Obama absolute control over the minions of America. I mean, we might as well. Who out there among the teaming millions really wants to do anything on their own anyway? Let's let the government go ahead and control them and then perhaps enjoy them. Allow me to explain a little more....

In my world view of people who live in the great United States, there are five distinct social classes; EC's, MCA's, CWGS's, CWHO's and MOB. Let's look at each in more detail, shall we?

EC's or Elitist class – These are the crème de la crème of society. They all have PhD’s and look down their noses at pretty much the rest of humanity. These are the people who are currently in power and who have a vested interest in living off the weak and the stupid...which is pretty much everyone else. President Obama is a shinning example of one of these snobs. They comprise only about 5% of the US population while consuming over 85% of its goods and services! Have you ever seen that many skinny politicians? Hmm.

CWHO's or Clueless with Hands Out – These sad urchins make up, by far, the largest group of Americans; possibly as many as 70% of the entire population. As a group; they don't work, have their hands out and sport a hopeful smile on their faces that everything will 'just work out'. Not a single one of these folks have a clue as to what goes on in Washington or abroad, but they can tell you in nauseating detail what's happening on the latest edition of Survivor. As a brainless, but useful political force, they alone are responsible for the Elitist's rise to power and are Obama's single largest support group. (Think cattle with TV's and you wouldn't be too far afield). Note also that a majority of these people are now becoming morbidly obese.... you know like stuffed geese!

CWGS or Clueless Who Game the System – This more significant class of individuals is an offshoot of the CHWO's, but they are much more industrious in their efforts to scam the government. They will expend considerable amounts of effort to squeeze what ever freebies there are to be had for so long as they never have to do an honest days work! To many of them, Medicare and Medicaid are synonymous with the term Mecca! These folks number about 10% of the population which also include the illegals who have made living off America a true profession. I like to think of them as leaches with a lust for living the good life.

MCA's or Middle class Americans – Finally, we get down to a small (15%) and currently dying group of individuals who are different in two respects; 1) they go to work every day and 2) they are politically aware. I'd like to say that MCA's are the best of all the above mentioned categories, but that would be unfair. True, they go to work, make money and pay the taxes that supports the rest of the shaky American economic structure. But, no one really cares about them or what they think. I'm thinking they will all be absorbed into the CWHO category in rather short order! Say by 2015 or so.

But wait! There's a fly in this gooey ointment of my thinking!! If no ones left working, then how will everyone get fed? I mean, after 2015, won't there at least be a food crisis? Ah, what to do??

Here's my rather simple solution. With only EC's, CHWO's and CWGS's left in the country, why not grind up all the CWGS's into feed for the CHWO's? This would kill to 'birds' with one stone so to speak. After the CWHO's are fattened up (and in true H.G. Wells fashion), we could become essentially like the two races of beings in the book The Time Machine; the ever hungry Morlocks and the shy and ever so tasty Eloi. Anyone care for a second helping of Weena?
Posted by Dan Owen at 10:26 AM No comments: 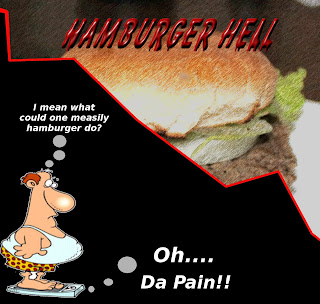 Up until I came across Ballpark frozen patties, I was not what you'd call a hamburger junkie. I'd have maybe one in a three week period. The problem was that they were a hassle to make at home, and the ones at the fast food joints were sky high in terms of salt content (1100 mg! No way Jose). Then I came across these little wonders straight out of 'hamburger hell'!

Now don't get me wrong! I think that overall, this product from the folks at Hillshire Foods is awesome tasting and it has that one extra thing that no real guy can resist – a patty is ready to eat in just 60 seconds (after a trip to the microwave)... NO WAY!!. Yeah, way, dudes! Add that to the fact that the sodium level is only at 470 mg and you have a real winner! The only down side, that I can see, is the hefty price you have to pay at the checkout counter! And uh yeah, all those hellish calories!
Posted by Dan Owen at 1:11 PM No comments:

There's no doubt about the fact that the newest McMuffin addition to the McDonald's breakfast menu is a whole lot healthier than the original.

While it's true that the real McCoy doesn't look very much like the advertisements, it did get the job done. The newest member to the so-called 'healthy foods' department at McDonald's U isn't as bad to look at and consume as I first thought! And nutritionally, it blow away the original Egg McMuffin in the cholesterol department! Compare the standard fare's value of 260 milligrams of heart clogging 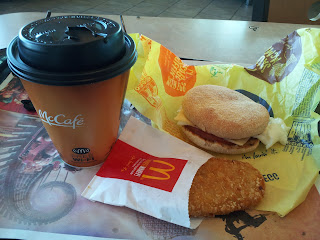 cholesterol to the meager value of 25 mg and anyone watching their heart health would tell you it's a no brainer! The good news is that, with my eyes closed, I really couldn't tell the difference! This entire meal also only came to 400 calories!

Thanks to the $1 coupon, I only paid a fraction of the cost of a regular McMuffin, so it was a good deal for about $3 and change. That said, it's doubtful that I will re-order one at full boat!
Posted by Dan Owen at 8:40 AM No comments: 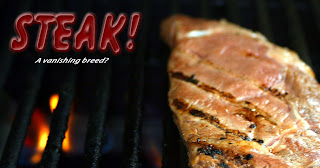 Actually, the sirloin steak is not so much disappearing, as it is becoming increasingly out of reach for many of us middle class consumers. If you're an average Joe raising a family, working and trying to make ends meet – steaks are probably already becoming more and more a rarity at your dinner table. The reason? The average price of beef has gone up over 33% since 2008 ($3.69/lb vs $5.53/lb). Add that to an 83% increase in the cost of gas, and just getting to a store to shop leaves very little left for such luxuries like steak.

THE NANNY STATE TO THE RESCUE!

So, how can the average America worker change this sorry state of affairs? Well, if you can't get rich (which is really hard to do and takes a lot of work), you can just go ahead and allow your finances to go down the tubes and crash! Start by getting fired from your job, max out your credit cards and sign up as a Democrat. If you are really aggressive about doing this, you could hit rock bottom in no time at all, and then count on the Obama's Nanny State to take care of your sorry ass. Get this stat! Last year, the Federal government spent over $60,000 to support welfare programs per household that was in poverty. Talk about a real life gravy train! Hell, sign me up!

I would, however, admonish everyone reading this to act quickly, though. Even the best and most optimistic estimates of how long it will be before a total economic collapse occurs are now less than six years off. After that, things will change rather dramatically as our Republic quickly moves on past second to third world status, all without passing GO.
Posted by Dan Owen at 11:23 AM No comments: