DeVane has lost it! 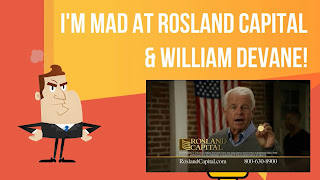 Someone should give Rosland Capitol a heads up. If you watch Fox New with any frequency, you probably have had a gut full of William Devane and his ads on the prices of gold. He's encouraging everyone to drop a minimum of $1500 to buy gold.  I guess no one every showed him a graphic like this... Gee. The price of gold is actually going down with time. Not perhaps the best idea when thinking of a good long term investment, ya think? Me? I'd think that buying up lots of guns and ammo just might prove a better bet should America get down to the business of a new civil War. But, that's just me! 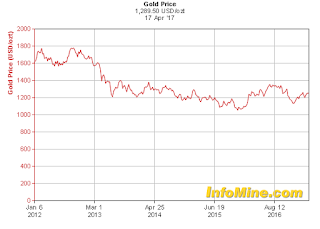 On one very bad day in the future, this idiot or someone like him, may come to your door at a time when it's all fallen down. And, he might offer you a fistful of gold in exchange for a bag of flour....
Posted by Dan Owen at 12:25 PM 1 comment:

OK, so steak and eggs! Good or bad? 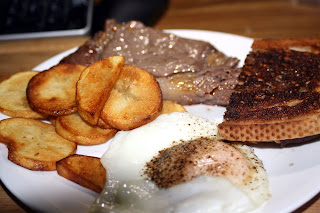 A good falling-off-the-diet-wagon would never be complete unless a gut-busting 'steak and eggs' breakfast styled breakfast was involved in there somewhere!

On any morning you could name, I wake up ravishingly hungry. On this particular morning, my fridge produced a Styrofoam-container full of eggs and a freshly purchased package of a (abet very expensive) Rib-eye steak. My mind put two and two together and then added some more stuff. I went in search of some bread and perhaps a potato to make hash browns with... [stomach rumbles a bit]... 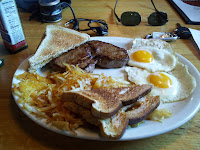 Now anyone can throw together a steak and eggs meal – here's one I enjoyed at Charlie's Steak, Ribs and Ale in Forsyth not very long ago! But come on! When a person like myself is at least appearing to be on a diet, it doesn't do for me to site down somewhere in public and shove a butt load of calories down the old hatch. [Far better I do it in private!]

With that in mind, I assembled the following, (in the dark with the blinds closed);

Let me see now, that comes to about six hundred calories!! I eat this and I can't eat anything else for what? Something like two days! [stomach rumbled more urgently]

Rather than mess around with those hash browns, I elected to go for simple fried potatoes or what I like to refer to as British dollar fries. These are easy to make, fast and don't hold as much cooking oil. Also, at the last minute, I went with just one egg. That and the fries switch brought the total calories down to the high four hundreds. A very doable breakfast!
Posted by Dan Owen at 9:21 AM No comments: 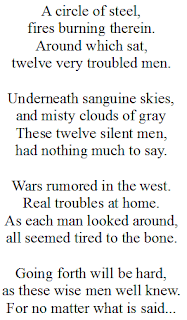 I intentionally left this unfinished....
Posted by Dan Owen at 7:49 AM No comments:

Forsyth MO. - Earlier this year a group of outdoor minded men and women apparently got together and pooled some money for an proper outdoor fire pit. A great place for people to get together and enjoy the spirit of community that only a good fire pit can instill. But now that we have one, it got me to thinking....

For not too much more money, one or more standard park in ground charcoal grills could be installed so that food could be properly prepared. Next we need some form of furniture in the form of benches and tables that would not lend themselves to theft. Add a small canopy and you'd have yourself self one hell of a great spot for out door groups that could work all year long, but which would be especially nice in the fall! Just a thought!

One afterthought concerning that recent concrete pour - 'Concrete does not dry, it cures. A 28 day cure is generally specified. It is desirable to keep the surface of the concrete wet or damp after it initially sets up in order to prevent 'dryout' which ends the curing process and limits its final strength!'

An update: After the rains of late April, the fire pit flooded and the firewood floated away.... a comment on these times?
Posted by Dan Owen at 1:30 PM No comments: 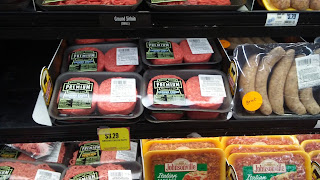 Forsyth MO. – In the meat section of the Country Mart store are preformed hamburger patties the likes of which I've found to be somewhat addictive!

At $3.99 a pound, these burgers were way more expensive than the regular packaged ground beef offerings, but I've never been accused of being very logical!

The patties both weighed in at about .35 of a pound. I prepared one on my venerable George Foreman grill, as it takes only a few minutes and much of the fat is drained off. From there, I added a bun, onion, mustard and ketchup and was ready to go! At about 340 calories, this wasn't a diet destroying meal, (as I reluctantly left off the side of potato chips)!
Posted by Dan Owen at 12:11 PM No comments: 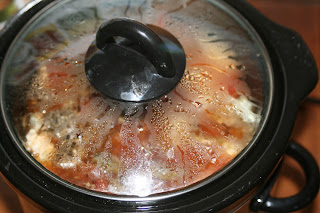 I was somewhat doubtful, when I recently ordered a small 2 quart slow cooker from Amazon, as to whether or not I would actually get much use out of the little guy. But, as I live alone, I thought to give it a try.

One of my early attempts was to make a simple vegetable beef soup using the following ingredients;

Really not much to this meal, and it was prepped in well under ten minutes. After everything was tossed in, it had come nearly to the top. I then added just enough water to finish it all off at an even two quarts. The result looked pretty good, (at least to my eyes). I set the slow cooker to high and then left it to its own devices for about four hours! The soup was definitely on!!

The end result was not too shabby - an excellent meal that consisted of about 5-6 servings and which cost me very little money, roughly $4 or about half a buck per serving. I now felt sure that me and my slow cooker just might have a long and enduring relationship!

To the old rugged cross

I was given 'express' permission to present this very good song on my blog by the performers! Listen and enjoy! The Lisu people in India are called Yobin. Lisu is one of the minority tribes of Arunachal Pradesh of India. They live mainly in Vijoynagar Circle in eleven villages.  There are about 5,000 Lisu people in India and they are a most special and wonderful people! In honor of these fine people, I do bend down to my knees and do give them homage. 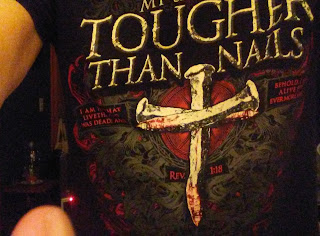 In the passing of my days, I embrace my Lord Jesus, and all that He has provided me.... and Lord, please grant me the strength to walk bravely. Hand in hand, with those who now suffer so cruelly, as I have not.. That said, I'll also embrace me being a little strange(r) than in past times!
Posted by Dan Owen at 7:23 PM No comments: 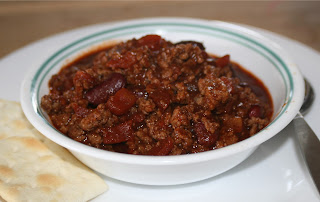 Making up a batch of Chile con carne y frijoles, is pretty easy to do. But, figuring out the true nutritional content, is muy dificil! Here is my latest effort to quantify a preparation I call My Chili.

Now, as it may be plain to see, this 'my chili' recipe is about as simple as it gets, using only four main ingredients! I took a pound of 81-19% blended mix of ground beef; browned it and drained off the fat – (ergo my rather svelte meat weight of only 374 grams), to which was added a can of petite diced tomatoes, a 'drained' can of red kidney beans and about 28 grams of Williams Chili mix. [Note: I also added just a dash (1 gram) of a bottle of dried chili seasonings from Mexico, just for some added spice, but no real nutrition]! All these ingredients were dumped into a 2 quart slow cooker, set to high, and then left unattended for a few hours to promulgate...

I generally like to serve this Tex-Mex meal-a-deal pretty much 'as is', adding only a bit of salt substitute (otherwise, it's rather bland) along with a few saltine crackers. (Hey, I'm only human). It makes for a very decent meal that doesn't bust ones' diet budget!