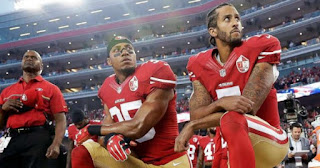 Just hours before Sunday’s NFL games were to begin, President Trump urged fans to boycott the sport until owners “fire or suspend” players who protest during the national anthem.

“If NFL fans refuse to go to games until players stop disrespecting our Flag & Country,” he tweeted, “you will see change take place fast. Fire or suspend!”

I agree 100%! The NFL is not a political engine – it is a sport that is played by highly paid men who get that sort of life, in part, because of the men and women soldiers who have died protecting and ensuring a life of freedom of which the flag is a symbol.

For that reason, I stand proudly with the President on this and will refuse to watch NFL games in the future...

And while the majority of the team owners have agreed that kneeling is a protected form of freedom of expression, I then also plan to mentally give all of them the 'finger' every Sunday about starting time. Individuals who disrespect the flag and what it stands for are complete cruds, in my view. I'm not going to waste my time cheering such individuals on in an arena where they make millions of dollars while others, who are now fighting and those who have fought and died for the flag and the nation it represents, pay the ultimate price tag for freedom.
Posted by Dan Owen at 7:51 AM