Is another mini Ice Age coming? 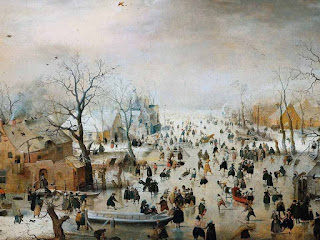 Part of the last Little Ice Age coincided with a period of low solar activity termed the Maunder Minimum (named after astronomer Edward Maunder). It's believed that a combination of lower solar output and high volcanic activity were major contributors (Free 1999, Crowley 2001), with changes in ocean circulation also having an effect on European temperatures (Mann 2002). 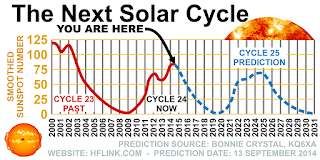 As we now enter into the later stages of solar cycle 24 (see chart), the amounts of solar radiation impacting the earth were down significantly! A year ago (July 2017), a chunk of ice roughly twice the size of Rhode Island broke off. What will happen to it? "It may remain in one piece but is more likely to break into fragments," Adrian Luckman, a professor at Swansea University and lead investigator of Project MIDAS, told Reuters. "Some of the ice may remain in the area for decades, while parts of the iceberg [may drift north into warmer waters]." And if a significant amount does melt, that could affect the deep thermohaline circulation belt of warm water that helps to keep parts of the northern hemisphere warmer than they would be otherwise! Such an occurrence could have been one of the reasons for the last mini Ice Age that occurred in Europe!

So, we have lots of fresh water entering our northern waters, a cooling solar cycle and all we're missing was the tremendous volumes of  carbon dioxide that were also emitted during that period of time. Oh wait! According to Climate.gov - 'Human activities emit 60 or more times the amount of carbon dioxide released by volcanoes each year. Large, violent eruptions may match the rate of human emissions for the few hours that they last, but they are too rare and fleeting to rival humanity’s annual emissions. In fact, several individual U.S. states emit more carbon dioxide in a year than all the volcanoes on the planet combined do.' OK....

So, are we heading towards another Ice Age of some sort? Well, no according to and article published by NASA, but they do admit that ongoing events may lead to some profound changes! Many scientists agree that perhaps the only effect that is helping is the global warming caused by us humans!