Tiangong-1 is about to crash! 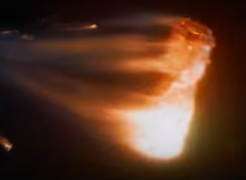 KDIP News - Any day now, the Chinese space station Tiangong-1 is expected to fall back to Earth – but it's been uncertain as to exactly where it will crash land. That was until the legendary scientist, Danomanno Dingo got involved. Now, he thinks he knows exactly where the flaming debris will hit!

Using a state of the art Texas Instruments calculation and pen and paper, Dr. Dingo pinpointed the exact location to be in southwest Missouri, near a town called Forsyth! 'Yes, I'm quite sure now!, Dr. Dino stated in an interview. 'A large portion of the T-gong-1 will survive reentry and will very likely hit the home of one Roberta Frack!' Dr. Dingo would not state to us exactly where Ms. Frack lived, but advised her to 'get the hell out of Dodge!'

We were able to track this location down and confronted Ms. Frack with the data that Dr. Dingo had given out to all news agencies. When we informed her that the remaining piece that could come crashing into her home was estimated at about 850 pounds, she shrugged. But, then we added that it would be also be traveling at just over three hundred miles per hour and would have been heated by the friction of reentry to

over 1500 degrees Fahrenheit! Roberta was understandably shaken by that additional piece of information! Yet, she also refused to vacate her home, vowing to 'sit it out in her basement'! We wished her luck and didn't disclose to her that something that big and moving that fast would likely flatten her home in a blinding flash of heat and energy. Bon chance Ms Frack, we knew you not!
Posted by Dan Owen at 8:27 AM