Look! Up in the sky! It's Tiangong-1 heading home! 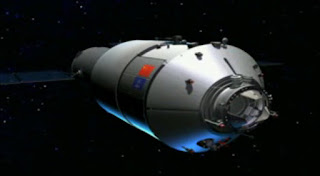 The incredible 8.5-ton spacecraft is now expected to crash into Earth's atmosphere between March 24 and April 19, although ESA officials stressed that this is just a rough estimate. In this blogger's opinion, the worst case scenario would be if most of the massive structure survives reentry and then slams into someone home, basically vaporizing it instantly. Another scenario would be the 'shotgun effect' where by the vehicle breaks up shortly before impact and then take out a small city block.

Note: This vehicle will in all likelihood burn up pretty completely and any debris that may fall will more than likely fall into the ocean. The odds of someone getting hurt are about the same as winning the Power Ball Lottery twice... in a row! But, that said, if you're have a really bad day....