The new forecast, which was issued March 15, predicts that the 8 million-ton Tiangong-1 will fall back to Earth between March 30 and April 6, though it stresses that this is a rough estimate. Crack scientist Dr. DanOmanno Dingo, however, has predicted the exact spot that the flaming debris will land on traveling at about 300 miles per hour. (He professed to use a very top secret computer system that can run trillions of calculations per second)! 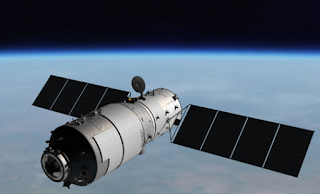 'I have centered the exact location of impact at coordinates North 36.688, and West -93.123 which would put it in southwest Missouri near or in a town called Forsyth' (see map above). He then stated. ' I'm a guessing that all that there mass will arrive pretty much intact, although it will likely also be heated to at 1500 degrees Fahrenheit'. After a moment, he look myopically around and also said that it will 'likely obliterate the most of that town.'

A check by this news team, on the stats of that town revealed that it was home to about 1200 citizens. A spokesmen for the County mentioned that they were somewhat relieved that only one small town would be adversely affected. Dave Jacks of emergency services was heard to mention, 'Thank God it's only some piss-ant place on the map!'

Local authorities have asked everyone living in or near Forsyth to 'remain calm' and have issued free hard hats to anyone who asked for one....

Note: In reality, the space lab is only about 8 tons and most all of it will burn up on reentry.  Also, the chances of it hitting on land are also extremely small. See the original article here.
Posted by Dan Owen at 6:26 PM