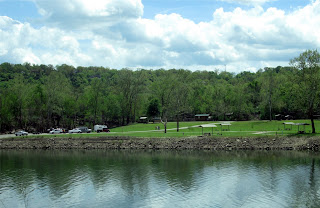 Just as 2015 was a wet year with widespread flooding of the park system in and around Bull Shoals, so then has 2016 been pretty much the opposite with the rain drops few and far between. As of April the 28th, 2016 the river level was at 658 feet msl which is a bit on the low side.

Both River Run and Shadowrock Parks looked to be ready to go for what I feel will be a signature year! Shadowrock Park already had quite a few RV's there when I visited on April the 21st! Spring is a great time to come out to this part of southwest Missouri to camp walk fish or do all three!
Posted by Dan Owen at 9:48 AM