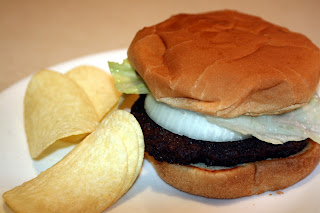 On a recent visit to my local grocery store, I was in search of some pre-made hamburger patties. You know the ones you don't even have to make yourself! They're ready to go into the microwave or grill of your choice.

The thing was, I didn't have a clue as to where they might be found and so stop the Deli lady to ask for help. Her name was Shelia 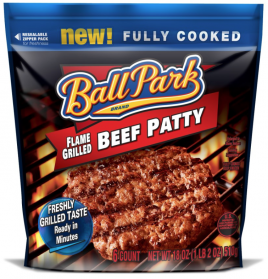 Odeela (I think) and right off the bat she wanted to know if I wanted the fresh or the pre-cooked patties. I stared helplessly into space waiting for some form of divine revelation when Shelia suddenly pointed to a package of Ballpark Flame Grilled patties that were on a frozen food shelf just a few feet away! With relief, I grabbed a bag and headed for the checkout counter. As I stood in line waiting my turn, I reflected that at $7.99 for a six (73 gram) burgers, I at least hoped the taste would be impressive! I was due that, right?

Once home, I extracted a frozen burger and elected to go the 'stove top route. I noted that the patty looked for all the world like a rotting piece of cardboard and when I placed it on a hot skillet there was no 'sizzling' sound. Well, after all, the picture did say it was already cooked! So there it set and then, after a few minutes,
it did begin to look vaguely like hamburger meat and I was vastly relieved. Before much time at all had expired, I'd made my self a hamburger that didn't look all that shabby. But, the big question was...how did it taste?

I'll be honest, I've had better burgers! This meat was a bit dry and though I think kids would enjoy it, us grownups would probably not. Money-wise, you can buy a pound of hamburger and make up 5 or six similar patties (the Tupperware hamburger press works wonders), freeze them and you'd have a much better product for just a little bit of extra work.

Followup: After nuking a patty in the microwave, I'd raise the score a point or two! For the money and convenience! This was not actually all that bad!
Posted by Dan Owen at 1:40 PM