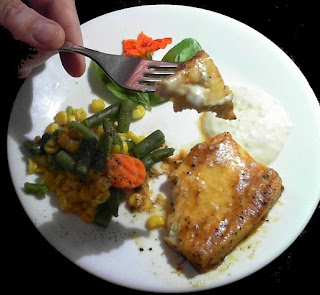 I thought it to be way past time to try out a fish dish and so I made it a point to pick up a box or two of Gorton's Grilled Tilapia at the grocery. One of the boxes contained Tilapia which is a mainly freshwater fish that inhabits shallow streams, ponds, rivers and lakes and which is now grown commercially. They have been served as far back as 2000 years ago! On a good note, they are very low in mercury, and on a bad note they are not very high in Omega-3 fatty acids. Oh well...

According to the package instructions you preheat an oven to 400°F and bake them in a shallow pan for 18 to 20 minutes. Easy greasy! I like to eat my fish with a dab or two of a 'special' sauce. Interestingly this sauce was being served over 2000 years ago and is still popular today. The ingredients are mentioned in the collection of ancient Roman recipes called the Apicius and are a combination of 'liquamen (Garum), pepper, cayenne, eggs, lemon, olive oil, white wine, anchovies, onions, tarragon, pickled cucumbers, parsley, chervil, hard boiled eggs, capers, green peppers and mustard. Give up? We call it tartar sauce and, like the ancient Romans, I feel it is a must have addition whenever I eat fish!

After cooking, I sat down at the dinner table, added a bit of the aforementioned sauce and dug in. (For a side, I had prepared a package of 'country mix' vegetables which I thought added greatly to the overall look of this dish)! The calories for just the fish came in at a modest 80. I also got 25 mg of Omega-3 fatty acids which was better than a sharp stick in the eye and the taste was really quite good. I gave this Gorton's fish offering a solid 8 and will plan on making their fish offerings a regular item on my table.
Posted by Dan Owen at 12:13 PM