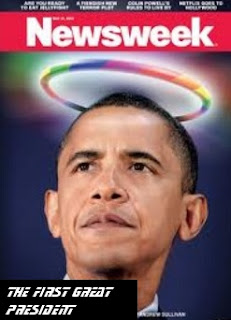 To obfuscate – verb. To render obscure, unclear or unintelligible

Taking unearned credit for the accomplishments of others!

Whenever a great events happens, like the take down of Osama Bin Laden, for instance, Obama has never mentioned himself, but rather is always praising Seal Team 6. 'My' is not a word in his vocabulary! Atta-a-boy prez!

Pointing a finger at others when he was at fault!

Our boy stands right up and makes that buck stop at his desk. I'd mention NRAgate, IRSgate and Bengazigate just to mention a few of the times when he really took it on the chin and accepted full blame. Can you believe this guy? This man needs another Nobel prize, toute sweet!

Waffling as the Commander and Chief!

When that 'red line' got crossed in Syria, our boy took immediate and crafty action...by doing nothing. That a boy O'Bamer! After all, it wasn't really his red line, now was it?

When it comes to caution, you have to give it up for da Man. Take that bad old pipeline coming down from Canada, for instance. For five years now, he's been the only bastion of dissent in a sea of overwhelming acceptance even by the likes of the EPA. This man of detail wants to 'study' it some more. Is it any wonder that Americans everywhere love and adore this icon of a man?

Thrown America's healthcare to the wolves!

Who else but someone like Barry would craft such a gem of a document as is the Affordable Healthcare Act. Just reading it will tend to make your jaw drop as you discover many of its inner complexities. It's good to know that everyone will be so well taken care of... And, gosh he's still got another two more years to help fundamentally change our collective arses. I wonder what he'll do next?
Posted by Dan Owen at 1:24 PM