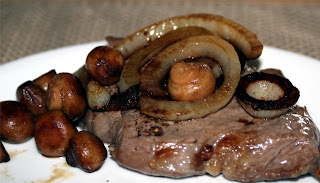 Steak au poivre or pepper steak is a French dish that consists of a steak, traditionally a filet mignon, coated with loosely cracked peppercorns and then cooked. 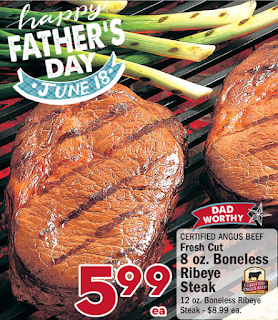 After responding to a local grocery store advertisement for 8 ounce boneless rib eye, I confessed to being a little disappointed. The steaks that looked thick pictorially, but were really not helped me decide to go with my version of a French favorite. Only, as I had no peppercorns, I elected to just use a little black pepper out of the can and go with the flow. Also, since I'd decided to pretty much butcher this recipe, I added some sliced onion and mushrooms that were flash grilled in a frying pan with a bit of oil and some Worcestershire sauce.

The only cooking procedure I had to be careful with was with the steak, due to its thinness. I placed it in a tabletop convection oven set to broil for just 2 minutes on a side. This left the center of the meat in a semi-rare state.
Posted by Dan Owen at 12:17 PM