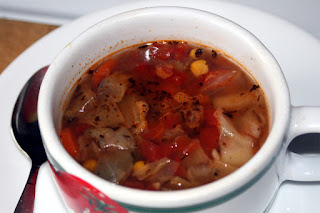 I said no, not particularly. Too much work. Me, I like the canned stuff. You know, it's quick and cheap. He smiled, took a spoonful close to his mouth, blew on it and then gulped it down. 'There you go', he said with a smile. You just made a Democratic Party case for me.... That which is good comes at a cost to build. That which is cheap also comes at an even higher cost'.
Posted by Dan Owen at 12:13 PM