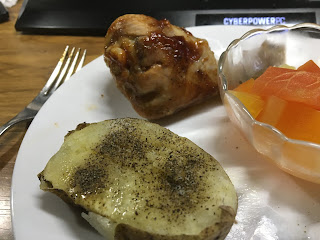 It was day number meh of my self quarantine. Periods of being alone interrupted by sporadic dashes to the local grocery store for needed supplies. My persona adobe was a condo complex where I was surrounded by top priority targets for the CoVid-19 disease. The feeling of dread was palpable. Me? I shrugged and padded off to the kitchen to make up a batch of roasted barbecued chicken legs, a personal favorite.

The convection oven I would be using was a popular model made by Breville. I'd had it for about five years and to my surprise, it was my most often used appliance! Today, I was going to attempt something a bit more complex than toast. Chicken can be a bit of a challenge, in the beginning of my learning cycle, but I have learned from past mistakes!

Washing a chicken leg, prior to cooking is optional. I like to do it as a matter of choice. I pat each piece dry with a paper towel, lay them onto a plate and them spray it piece lightly with Pam cooking spray. A bit of pepper is also added as an optional choice.

Next, I set the oven to 400 degrees, made sure the grate was at the 'roasting' level and set the time for 20 minutes. While the over was heating up, I then inserted a temperature probe into one leg close to the bone. A ding from the oven announce that the correct temperature had been reached and Ii was all set to go! Note that I like to add the barbecue sauce towards the end of the cooking cycle. Note: The chick pieces get turned once halfway through the 20 minute period

The temperature probe informed me that the chicken was then at about 167 degrees. The next step was to lower the cooking temperature down to 325 degrees. Turn each piece, add some sauce to the top sides and set the timer for ten minutes. After five minutes, I turned each piece and cover the other side with sauce. At the end of ten minutes, the chicken temp was reading 16x degrees...

So, was I done here? Not hardly. The chicken pieces were re-coated with sauce, placed on a clean cooking rack and place back into the oven with the grill raised to the middle position. I then proceeded to broil each side for about 5 minutes in order the lightly caramelize the sauce. Now I was done!

I like to let them rest for a bit. Saw 15 minutes to cool a bit and for the meat to set. Now, where did I put that potato?

After nuking a medium sized Russet potato for about5 minutes on high, I cut it in half and added that to my plate containing two chicken legs and some fruit salad! And, yes, it was and awesome meal! my next post will cover my weight problem since my quarantine period began.