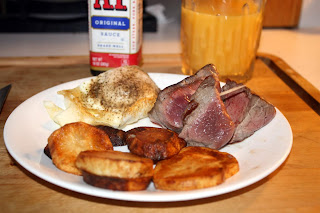 The title above was somewhat misleading. My version of this popular meal also contains fried potatoes and OJ making it not that diet minded! Also, there was only one egg consumed!

Whenever you have meat and eggs together on one plate for breakfast, you are talking a high protein slug of food to begin your day. Add in the fried potatoes and that's a also definite carbo-slammer. So, this is not something for the man or woman who is trying to shed some pounds. That said, it could be a good meal for a young athlete who was trying to bulk up a bit.

The meat I often choose was a cut of top sirloin, a thick hunk of meat that grills up really well. It's sort of like a second class filet mignon.

[Whenever I 'grill' up meat like this inside, I often use two pieces of equipment; a convection tabletop oven and a small Foreman grill. I first heat up the Foreman and cook the steak for just a minute before transferring it to the oven set on broil. That part of the cooking process usually is for about three minutes on a side. When done correctly you get the grill marks, yet have a just barely done interior]!

The fried potatoes consisted of one small Russet that had been peeled and then thickly sliced in to 'dollar' shaped pieces. These were quick cooked in hot oil, then removed to a paper towel and the sprinkled with a salt substitute.

If everything is done in a smooth fashion, the whole cooking process takes only about ten minutes!
Posted by Dan Owen at 8:10 AM