Long Horn blues!
Forsyth MO. – OK, so everyone can have an off day, and apparently today was the day for my server at the Long Horn Family Dining establishment located in Forsyth Missouri. As had happened in the past I sat down and got a cup of coffee, but no menu. And, while I have a pretty good memory, it's far from perfect. Next the server had a difficult time understanding my order, and when the order came, it was on a tiny plate that was missing one of the sides. (It did finally show up a bit later). All in all, not a very good experience on this date.

Dark times at the Country Mart!

Not to be deterred, I finished my breakfast and went over to a local grocery store known as the Country Mart, located near the intersections of Coy Blvd and Hwy 160. As I walked it, it got somewhat surreal as the store was mostly dark inside. Sure, there were a few islands of light, but other isles and most notable #3 was pretty much black. Out of the corn of my eye, I could have sworn I glimpsed some kind of dark object flitting about near the spices and oils. And, even though vegetable oil was on my shopping list, I passed that isle by at a mild gallop! 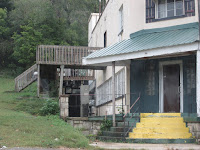 In a strange but true series of events, After posting that I had no idea of what was going on with the Shadowrock Lodge, I got a call from the owner. She told me that due to some setbacks, they still planned to open in '6 to 8 weeks'. If things do work out, that would be great news for the area. 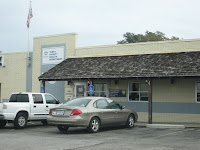 As I was pretty much striking out on this day, I decided to stop over by the Forsyth Mo Health Department to see about getting a flu and a pneumococcal pair of arm blaster shots just to sort of top off the morning. I'd been there on numerous occasions in the years before and yet the staff there had a hard time locating my records. Yes, it was beginning to feel like a Stephan King movie for me, at that juncture. But, the files were discovered and I was given both shots. While the nurse was injecting me, she confided that I was likely going to hate her in about 24 hours! Driving home, I then almost hit a deer less than a block from my home.....
Posted by Dan Owen at 11:11 AM