Simplify, simplify simplify. Some good thoughts by Henry David Thoreau. And, like most things in culinary life, it's the simple stuff that often shines. And, while this is your typical bare bones chili, it's still damn good!

After many years of experimenting with all sorts of chili recipes (I even once bought a book on the subject), I've come up with a rather simple recipe that seems to work pretty well for me. Mind you, there is nothing fancy about the ingredients list. I've tried fancy cuts and combos of meats and while they were OK to even good, I wasn't entirely satisfied. With this simple chili, I was! So, here goes.....

Notes: It's not human nature to ever leave good enough alone. I decided to add the smallest amount of a Scorpion pepper into this recipe. You know. Just to give it a bit of a kick.

It's the flu season, don't ya know? 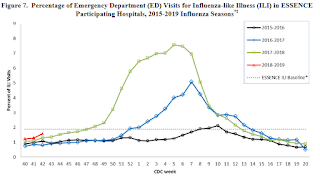 The month of October is the official start of the flu season for the Northern Hemisphere and was just ending down south with Pediatric flu-related deaths reaching 172 during the 2017/18 USA influenza season. Of the sub-typed influenza A viruses which accounted for most of the severe cases of illness, 964 (76%) were influenza A(H1N1)pdm09 and 305 (24%) were influenza A(H3N2). So, that could be pretty much what we can expect up in America as we waddle into the late fall and early winter months!

In Missouri, incidents of the flu, during the 42nd week, were sporadic and that was the case across most all of the continent. That said, please note that the curve, seen in the graphic, was on the high side. I would therefore encourage everyone to go and get a flu shot post haste!

On November the 6th, millions of Americans are going to help decide on what sort of country America will be shaped into as critical seats in both Houses are currently up for grabs! And while I belong to no Party, I can already tell the direction which I intend to go at the voting booth.

The Republican Party is pretty screwed up, in my opinion. That said, they seem to have the concept of a Constitutional Representative form of government pretty well understood. Strong borders, low taxes, a good military, supporting the 2nd Amendment and no mob rule are good platforms to endorse by my way of thinking.

The Democratic Party members have a much smaller platform that seems to endorse; wide open borders, high taxes, no ICE, HLS or police. They also seem to endorse hate speech via the Media and are definitely promoting a re-birthing of the failed Obama Healthcare deal. In point of fact, they appear to openly endorse the idea of America becoming a Socialistic State like Venezuela!

Uh, no thanks. Over a million brave men and women have died to make this Republic one of the best places to live in the world. And, for me to turn my back on them now, is not an option for me to consider. I'm voting the Republican ticket across the board!
Posted by Dan Owen at 12:29 PM