I guess things could be worse! 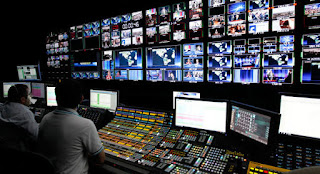 11:00 AM EST - 'Good even and here is the news for this December the 5th, 2018. I'm DanO Dingo and events were certainly heating up domestically as throngs of irate college students, dressed in ANTIFA garb, have now completely trashed downtown San Francisco in an apparent protest against Donald Trump and his attempts to shore up troops at our southern border! We're also informed that some seventy five thousand 'refugees' were even now storming random sites all across California and Arizona. Causality counts, while sketchy, were said to be mounting into the hundreds.'

12:00 Noon - 'DanO here and we have some somber news to report as a reported 100,000 plus Chinese shock troops were said to be headed for the Russian border in response to threats made by Putin to 'shut down that 'slant-eyed backward country' once and for all.'

12:20 PM - 'Boy folks. It's been a heck of a day already as reports are now coming in telling KDIP News that some type of nuclear weapon or weapons were detonated somewhere in Israel only minutes ago. Details are still very sketchy at this time, but all indications point to Iran as the responsible party. We'll follow that story and report back to you when there's more new information.'

12:45 PM – 'Scientists are now telling KDIP News that the floor of Owen's Valley near Yosemite has abruptly risen three feet over an area of approximately twenty five miles. Rumors of the super volcano that rests just below that spot, now rumored to becoming active, are flying over the airwaves as thousands of frightened citizens flee to the West Coast.'

1:00 PM - ' President Trump has announced that a Nationwide broadcast will be given by him concerning the loss of over half the worth of the Stock Market, just since the opening bell at the start of this day's trading. We've learned that he plans to announce the setting up of 'soup kitchens', for anyone who will not be able to afford to pay for their meals in the short term. Chuck Schumer was also scheduled to make an announcement where it was rumored that he planned to blame the sudden market drop squarely on the Trump administration.'

2:00 PM – 'DanO here. Well, just when you thought things could get worse, they did. The General Accounting Office for the US government has just issued a statement declaring that there is 'no more money' to pay for entitlement programs as most of the GNP will be directed towards paying just the interest on the National Debt. The action will 'severely affect benefits' coming from Medicare, Medicaid and Social Security, for the foreseeable future. One official was heard to say, 'Good luck out there everyone'.'

5:00 PM – 'Hillary Clinton has just announced that she intends to run on a joint ticket with Oprah Winter for the 2020 electoral race for the Presidency! Good luck to them both. In other more exciting news, the KDIP News organization was just acquired by Media Matters, a George Soros run conglomerate. In a prepared statement, Mr. Soros assured everyone that KDIP would continue to publish only the truth, as he saw fit!'

9:00 PM – 'Sadly, this will be my final broadcast, as the new ownership has decided to replace me with Louis Farrakhan, beginning tomorrow morning. Mr. Farrakhan has promised us he will tone down his rhetoric on the Jewish problem and that hewill really clean up his act concerning 'those damn Middle Class white crackers'. That was all the news for this Wednesday in December! I'm DanO Dingo and I'll see ya all around'
Posted by Dan Owen at 1:24 PM