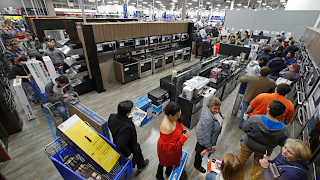 WASHINGTON D.C. – Consumers boosted their spending in September at the fastest pace in seven months, while their incomes rose by the largest amount in nine months. Both are good signs for future economic growth.

The Commerce Department says consumer spending rose a sharp 0.6 percent last month. It was the biggest increase since a similar gain in March and was three times faster than the 0.2 percent September performance. Incomes, which provide the fuel for spending, were up 0.5 percent in October, a significant pickup from a 0.2 percent September gain.

A key gauge of inflation tied to consumer spending posted a 2 percent rise in October compared to a year ago, hitting the 2 percent annual target for inflation set by the Federal Reserve. 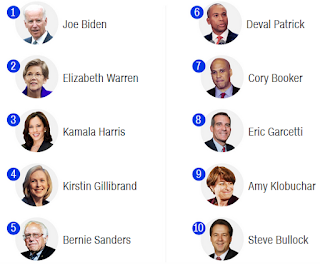 Holy Cow~! That was the news that has left the Left in a very rattled state of mind, as they continued to fumble around with a cast of ten potential candidates to be fronted for the 2020 Presidential election cycle! Apparently, 'Sleepy' Joe Biden is leading the pack in the early going. And what sort of platform will old Joe be championing? No one is really sure other than the rather ragged and torn mantra of 'We Hate Trump'.

Sure, the economy could go always sideways over the next couple of years. And, you can bet the family farm that the Democratic led House will do everything in their power to drag their feet on key social and economic issues. Why? Because it's not about the We the People, its about them regaining their lost power base. Duh.
Posted by Dan Owen at 8:14 AM