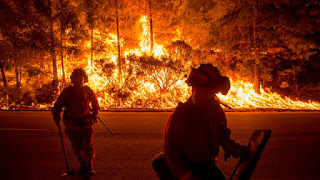 'On Friday, the busiest shopping day of the year, the federal government published a massive and dire new report on climate change. The report warns, repeatedly and directly, that climate change could soon imperil the American way of life, transforming every region of the country, imposing frustrating costs on the economy, and harming the health of virtually every citizen.' See the entire story here.

Here's the real deal. As everyone, at least many of my friends have hardened themselves to the tripe coming out of most media channels, so then too should they be careful when it comes to ANYTHING that the deep state government throws out. Anytime you see trigger words like 'dire', 'massive' or ''imperil', take a step back. Those are code words for massive tax increases soon to be headed your way.

The reality of the world is that yes, we do have global warming. The other reality is that many climatologists fully support that reality. We are adding about 5% new biomass to the planet due to increased levels of carbon dioxide. That's been going on for some time. That means longer growing seasons for larger parts of the world. That means more foods at lower prices. That is a better thing than seeing a 5% reduction in biomass per year due to global cooling. Duh.
Posted by Dan Owen at 6:11 PM