A pound of homemade potato salad? Yeah, that works! 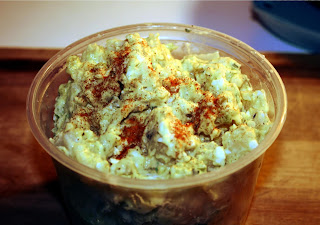 Every so often I get a hankering for some good old fashioned potato salad. The problem was, I didn't particularly like the offerings at my local Deli. I also wasn't too fond of paying two to three bucks per pound! Thus it was that I came up with this simple old fashioned recipe which goes together fairly quickly, produces about one pound of salad and costs only about a dollar to make!

After boiling the potatoes for about 15-18 minutes, place them in the fridge until they cool off, then remove, peel and cut into pieces and place in a small bowl. Next, take the hard boiled egg and rough chop into pieces and add them to the bowl. Next, add the rest of the ingredients and mix everything together with a fork pretty well. Place into a covered container and refrigerate for at least one hour. Makes about four servings.

Notes: For a fast way to cook the potatoes, just nuke them for about four minutes instead of boiling.Much of the flavor is in the mustard, so adjust amounts accordingly.
Posted by Dan Owen at 8:49 AM