Let's let the government take care of everything! 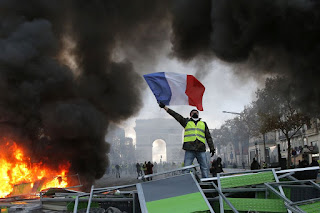 France - Thousands of French police fired tear gas and used water cannons against protesters who were destroying shops and lighting fires along Paris’s Champs-Élysées this weekend.

People were protesting fuel taxes, but the demonstrations are also an indication of growing animosity toward French President Emmanuel Macron.


The tax will increase the price of fuel by about 30 cents per gallon and will continue to rise over the next few years, the French government says. Gas already costs about $7.06 per gallon in France.
---------------------------------
Whoa! Hold on! With gas at $2.15 in my neck of the woods in SW MO, I was taken aback just a bit. Teleporting my vehicle to France would mean I'd pay $105 plus just to fill up! And while France is only a Socialist leaning country at this time, I have to wonder how much worse things will get.... Thanks President Trump, you're doing a great job over here!
Posted by Dan Owen at 12:03 PM