What's the X-37B Military Space Plane doing up there? 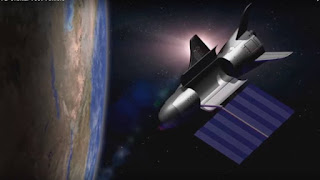 The latest mystery mission of the U.S. Air Force's robotic X-37B space plane has now passed the 400-day mark with no clear deadline of returning home.

This mission - known as Orbital Test Vehicle (OTV-5) - was rocketed into Earth orbit on Sept. 7, 2017, atop a SpaceX Falcon 9 rocket from Launch Complex 39A at NASA's Kennedy Space Center in Florida.

The un-crewed space plane is carrying out secretive duties during the X-37B program's fifth flight. A fact that has not escaped the shrewd minds of people like Chuck Schumer and Dianne Feinstein, two feisty Democrats of recent Brett Kavanaugh fame. Without any factual corroboration, they've both accused Trump of evil doings with the craft... (uh, where have I heard that before)?

One possibility that was leaked by a high ranking official indicated that the plane was equipped with hi-tech missiles that could hit any target at will. Another was that the planes had a sinister virus on board that was flu-like, but much more deadly. Upon release, only those (Republicans) who had gotten special 'flu shots' would be likely to survive the winter. Lastly, there is a chance that the plane has test 'structures' on board that are being exposed to long term periods in space. Personally, I like option two the best!
Posted by Dan Owen at 12:17 PM