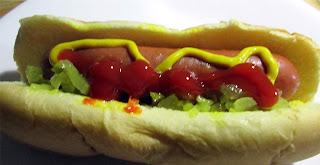 As bad as the average wiener is nutritionally, there is still a lot to be said for the All American Dog! This day, I just kicked it up just a notch with some great condiments!

I had a couple of Bananarama peppers that grew on a stem that had been cut down the year before in the fall and then left over the winter on my condo balcony. But, lo and behold, there was a couple of green shoots growing out of that old stem by the following February! I brought the pot back in and placed it on a south facing windowsill. Amazingly, I got two small peppers to grow by that April. I decided to harvest one and cut it up as a spicy addition to my hot dog!

When choosing a wiener, I almost always go with something by Oscar Meyer. I also like the Ballpark brand of buns. For my choice of condiments, I chose the above mentioned pepper that I diced; a couple of Mezzetta Hot Pepper rings that were also diced and then a dash or two of  traditional mustard and ketchup. And OK, at the last minute, I added a bit of sweet pickle relish just for the heck of it.

Now, for a bit of pseudo DanO culinary science. While I wanted the pickle relish to remain just as it was, I did not want to squander the subtle heats of the pepper rings or the Bananarama by leaving them as chunks! To that end, I chopped down both these guys to a really fine structure (DanO's method of blended taste distillation). That way, I got the 'essence' of minor heat with each bite.

The end result was a slightly warm dawg that was way too satisfying.