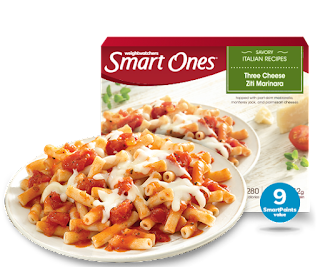 Another title might be, 'How the Smart Ones people destroyed what was a good meal!' There were lots of comments pertaining the manner in which the Weight Watcher company 'improved' this offering which I had snagged on sale at $2. According to Heinz, the company that makes the Smart Ones product line, the meal was described as 'ziti pasta in a delicious marinara sauce topped with mozzarella, Monterrey jack and Parmesan cheeses.' And gee, that picture on the package did look sooo yummy, so I figured what the heck....ding ding, my net worth dropped two dolingos.

After arriving home, I was faced with a choice of eating either a baloney sandwich or the Ziti Marinara offering, I elected to do the latter. What a surprise! Ziti pasta is the same type of noodle you see on a box of cheese and mac. So, of course, I already liked that ingredient. And those three cheeses didn't hurt. Finally, at only 280 calories, I have enough room in my dinner budget for a small salad! So, what was not to like? 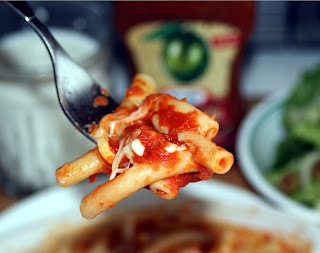 Preparation was a simple deal of peeling back a corner of the film, nuking for three, stirring and then nuke for another minute. Simple directions for a simple man like myself. I made this meal and had plenty of time to throw together a simple romaine lettuce salad. (I really adore meals that all come together within just a few minutes. It's a lazy guy sort of thing).

Now, I had to admit that the actual picture of this meal did not quite match what I had observed on the package. (Still, it was a far cry better than what you'd see from a stomach cam)! The noodles were Al Dente (firm) and so was quite palatable. To my happy surprise, this meal was pretty darn good overall! I also felt that the sauce was quite good, but admit that I wondered what the 'old recipe' tasted like. The package I had purchased gave me no hint of what version this recipe was... I assumed it to be the new one, though.